15:42
Kyiv Mayor Vitali Klitschko: Zelensky wants to strip me of Ukrainian citizenship
14:51
Best pilot of Ukraine Air Force killed under unknown circumstances
14:37
Russia prepared to terminate diplomatic relations with USA on one condition
13:50
The Guardian reveals when the West will stab Ukraine in the back
20:57
Video shows moment of Salman Rushdie attack
19:16
Russia will face serious sanctions as USA will not recognise Donbass referendum
18:57
USA successfully empty European armouries having supplied all weapons to Kyiv
18:21
Chechen war veteran who now works as drag queen sings Russian anthem in a gay club
15:49
14-year-old hockey player dies as puck hits him in the chest during training 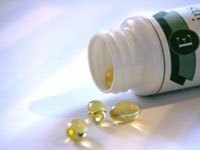 Their study involved 77,721 people in Washington state ages 50 to 76, tracking their use over the prior decade of supplemental multivitamins, vitamin C, vitamin E and folate to see if this would offer protection from lung cancer.

None of the vitamins looked at in the study was tied to a reduced risk of lung cancer. In fact, people who took high doses of vitamin E, especially smokers, had a small but statistically significant elevated risk, the researchers said.

Vitamin E is an antioxidant, thought to protect body tissue from damage caused by so-called free radicals, which are unstable substances that can harm cells, tissues and organs. It also is important in the formation of red blood cells.

The people in the study were followed for four years and 521 developed lung cancer, the vast majority of them smokers or former smokers, Slatore's team reported in the American Journal of Respiratory and Critical Care Medicine.

The research did not look at beta-carotene, but previous work showed that people taking beta-carotene supplements, particularly smokers, had a higher risk of developing lung cancer than those who did not.

In those in the new study who developed lung cancer, the researchers saw a small increased risk associated with vitamin E supplements in addition to the expected links to smoking, family history and age.

This amounted to a 28 percent increased risk of developing lung cancer for those taking vitamin E supplements at a dose of 400 mg daily for 10 years, the researchers said.

The notion that vitamin supplements are healthful, or at least not harmful, arises from the desire of many people to match the benefits of a healthful diet with a convenient pill, Dr. Tim Byers of the University of Colorado School of Medicine wrote in an editorial accompanying the study.

"Foods that are rich in vitamins seem to be associated with reduced risk of cancer, but vitamins packaged as pills clearly do not have the same effect," Byers added.