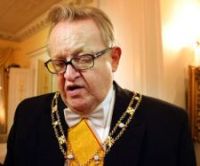 Foreign minister of Russia doubts if U.N. envoy overseeing talks on Kosovo's status is able to foster a fair settlement of its dispute with Serbia and suggested to bias him.

Sergey Lavrov was responding to published remarks by U.N. envoy Martti Ahtisaari that said Russia would diminish its international stature if it was to block negotiations on the future of the breakaway Serbian province - presumably by vetoing a potential U.N. resolution.

Lavrov said he had not heard Ahtisaari's comments, published Thursday in a Finnish newspaper, but that they would be "out of place."

"If such an announcement lowers someone's international status, it is not Russia's," he told reporters.

Ahtisaari's job was to come up with proposals to resolve the dispute, Lavrov said, and hinted he could be unfit to monitor further talks between the leaders of Serbia and Kosovo.

The remarks came amid a standoff between Russia and Western nations including the United States over Kosovo. Russia says it will not support an outcome that is not approved by Serbia, which opposes independence for the province.

In April, Ahtisaari recommended Kosovo be granted internationally supervised independence - a proposal supported by its ethnic Albanians, but rejected by its Serb minority, Serbia and Russia, which warned it could use its U.N. Security Council veto to block the plan.

In a bid to win support from Russia, Western nations recently revised a U.N. resolution on the issue to call for four months of intensive negotiations between Kosovo's ethnic Albanians and Serbs - without any promise of independence if talks fail.

Serbia swiftly rejected the plan. Russia is studying the proposal, but Lavrov suggested it was little but a dressed up version of Ahtisaari's initial plan and still included a "predetermination of Kosovo's independence," according to Russian news agencies.

In an interview published Thursday in the Finnish newspaper Lansi-Savo, Ahtisaari suggested Russia would deepen the tension over Kosovo and damage its own reputation if it were to veto the new version of the resolution.

Kosovo remains a province of Serbia, but has been under U.N. and NATO administration since a 1999 NATO-led bombing campaign - which Moscow vehemently criticized - halted a Serb crackdown on ethnic Albanian separatists.