The funeral ceremony to bid farewell to Russia's Ambassador to Turkey Andrei Karlov, who was killed in a terrorist attack in Ankara, took place in Moscow on Thursday, December 22. Karlov has become the first Russian ambassador, who was killed in Russia's modern history. 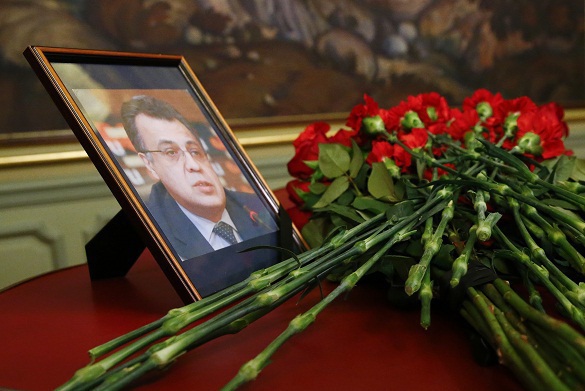 Russian President Vladimir Putin personally visited the funeral to honor the memory of the killed diplomat.

The coffin was brought to the central building of the Foreign Ministry of the Russian Federation on Smolenskaya Square. Andrei Karlov's relatives and a number of Russian officials attended the ceremony.

"Andrei will remain in our memory forever, and we will never forget him," Lavrov said. The minister handed over the Star of the Hero of Russia to Andrei Karlov's son.

Russian President Vladimir Putin arrived at the ceremony at about midday. The head of state laid a bouquet of red roses to the coffin and then talked to Mr. Karlov's relatives.

President Putin delayed his Q&A conference with journalists to be able to take part in the funeral ceremony. The press conference will take place on December 23.

Putin's press secretary Dmitry Peskov earlier said that the news about the killing of the Russian Ambassador to Turkey was "emotionally very hard" for President Putin. The Kremlin perceived the assassination of the Russian diplomat in Turkey as an attempt to undermine the normalization of the Russian-Turkish relations and hinder the process of the political regulation of the crisis in Syria.