Putin: We are witnessing campaign to revise WWII results 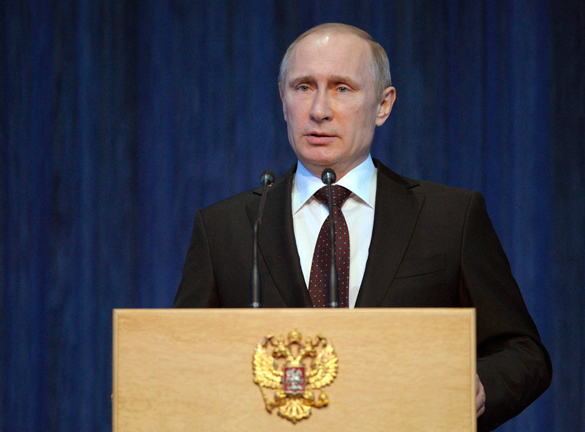 President of the Russian Federation Vladimir Putin, addressing the participants of the conference "Yalta-1945. Past, Present and Future", suggested one should turn to the experience of a true alliance that was once established by the leaders of the allied countries that defeated fascism.

Addressing the participants of the conference, Putin's plenipotentiary representative Oleg Belavintsev delivered a message from the Russian president.

In his message, Putin urged all forces to prevent the falsification of history and take all effort to confront the campaign to revise the results of the Second World War.

"It was here in the Livadia Palace, where the meeting of the allied anti-Hitler coalition took place. The coalition played a huge role in the final defeat of Nazism. Most importantly, the Yalta conference "defined the basis of the postwar world and the nature of international relations for years to come," Vladimir Putin said in his message for the participants of the conference.

"I would like to note that despite political differences and different views on current events, the leaders of the USSR, the USA and the UK managed to rise above their ambitions, find constructive approaches to complex problems in the interest of the  speedy completion of WWII and the establishment of a global security system."

"After the Yalta Conference, the Potsdam Conference, the Nuremberg Trial,  it seemed that the ideology and criminal practice of Nazism had been fully exposed and defeated. However, recent events suggest otherwise. We are witnessing the unfolding campaign to revise the results of the Second World War, to diminish the contribution of the Red Army in the great victory," Putin also said.

"These circumstances can not leave us indifferent. We must firmly oppose all attempts to falsify historical facts and defend the truth about the war," Putin said.