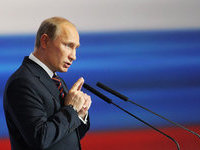 It is the paradox of his life that he loved the past, and he alone really lived in the future. That is, he alone lived in the real future.

In order to understand the miscomprehensions between Russia and Western democracies, we must recall the missions of a political leader now in Europe; I shall take examples of France, Spain, Italy and England: thanks to God Germany is different, even if Mrs Merkel is somewhat forced to follow the foolish agenda of her colleagues and America, of course. And we must explain why Mr Putin is sometimes misjudged or merely specify what stuff a Western leader is made off:

- In today's Europe, a Western leader is a witness, sometimes an actor, of disintegration of his or her country. Flemish don't want to be Belgians, Scotsmen don't want to be English, Catalans don't want to be Spanish, and members of the Lombard league don't want to be Italians! Such a barbarity reflects the nihilism of our politics. The multicultural agenda of France and England, for instance, whose people are being replaced (only 85% of whites in each case...), accelerates too this lunatic process. The destroying of the soul and body of our nations is a key factor and politicians are recruited to fulfil it.

-  A Western leader is too ordered to humiliate his country and to diabolize its past. History has become repentance. A European country is just made of the horrors of his past. American revisionist historians come at point to comment our monstrous history, in order to submit us the more they can. Spain is inquisition and expulsion of the moors, France is colonization and Vichy, Germany is Hitler, Italy Mussolini. Don't find another factor than hatred and bigotry in our history! And actually Hollande or, recently, Zapatero with their bizarre and insane memorial laws seem to be in charge of disgusting our lands with their souls and pasts. Of course this process accelerates despair and even decline of population. A unisex world is too programmed, which Chesterton had already labelled sexlessness.

-  A Western leader is nowadays a sheriff of Nottingham ordered by invisible King John and his bureaucracies to castigate his people and taxpayers. They have been ashamed and humiliated and should be prepared to accept the slimming diet and the tax rising business. The western leader must too continue the "striptease of the state" and the so-called privatizations that have in fifteen years ruined Western Europe and America (since at least Reagan) and lowered our standards of living. The agenda of privatizations is the greatest of modern scandals. Obeying the false analysis and the orders of absurd Gurus like Milton Friedman, inspirer of infamous Pinochet and brutal shock-therapies, western states have ruined themselves without any other compensation than more debt and more submission, not to mention the formidable rate of unemployment anywhere. The sacrifice of Greece, the mother of Europe, in the name of her debt and the euro is then exemplary.

- Yet, a Western leader today is also a little soldier of America, and a great distributor of American peace anywhere. He has to ignore a normal geopolitical agenda (an Eurasian entity for instance) and has to finance the reconstruction of Afghanistan (!) and destroy Iraq, Syria, Libya (all states founders of the famous Arab League promised to a full non-existence now) and other future rogue states denounced by neoconservative hawks and so called thinkers. This behaviour is a ruin for our economy but a political leader in the west is not here to fix the economy. He has just been elected to show that his people are not the elected people.

I could mention other scandals, other European traits. Yet the four points mentioned above underline the big challenge of today: the destruction of Europe by her leaders. Western Europe is programmed to become a huge and poor commercial centre run by political and cruel commissars, invisible stockholders and the magi of Qatar!

This is when Vladimir Putin interferes with his pragmatism, his realism, his patriotism and his geopolitical dream; even with his faith: it is no hazard that Chesterton titled his most famous book Orthodoxy. Yet, Vladimir Putin looks like a prehistoric statesman, since he still believes in the history and destiny of his country and since he doesn't commit to humiliate and spoil his people's soul and conscience. His program doesn't fit well in the desperate agenda of our leaders. If people are running away from socialist France, from Spain and Italy, if so many Englishmen have fled London and Britain, it is not only for economical reasons. It is for political and metaphysical reasons as well. They cannot stand their land anymore.