Putin Is Firm in his Intentions and Popular as Ever 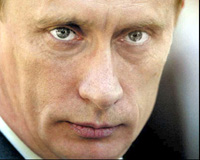 Putin Is Firm in his Intentions and Popular as Ever

Putin admitted that terrorism remains a top threat to the nation and promised that the authorities would act "very harshly" to uproot terrorists.

"We have enough resolve and firmness for that," he said, opening a question-and-answer session broadcast live by Russia's state television.

The bombing last Friday of the Moscow-to-St.Petersburg express train fueled fears that Russia could face another wave of terror attacks outside the volatile North Caucasus region following years of relative calm and official claims that Islamic militants had been defeated.

It was the first deadly terrorist attack outside the North Caucasus since the bombings of two airliners and a Moscow subway station attack in 2004.

On Wednesday, hundreds of Russians protested against terror in both Moscow and St. Petersburg after Chechen rebels claimed responsibility for attack on the train. Russian investigators say a bomb had been placed under the tracks and traces of explosives and a crater were found at the disaster site.

Putin also focused heavily on economy during the show, which featured televised hookups with workers from several provincial towns, casting himself as a paternal figure capable of fixing the nation's problems.

The televised performance sent another strong signal that Putin remains the dominant force in Russian politics, overshadowing his designated successor, President Dmitry Medvedev. Medvedev hasn't made any such appearances since his March 2008 election.

Putin said Russia has moved past the worst phase of the economic crisis and claimed credit for softening its impact on economy and the population.

"We can say with a large degree of certainty that the peak of the crisis has been overcome," he said.

He added that Russia's rising birth rate has shown that "people believe in the positive development of the country."

Putin's appearance Thursday will be closely watched for signals on whether he plans to regain presidency in the 2012 elections. Putin had to resign in 2008 after two consecutive terms in office, but since then the law has been changed so he is eligible to run for another six year-term in 2012.