Russia slapped back at Georgia on Wednesday, suspending consular operations at its shuttered embassy in Tbilisi so that ordinary Georgians can't visit relatives in Russia. 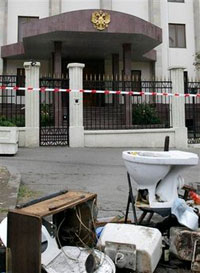 Russia closes its embassy in Georgia

The suspension, which means no new applications for Russian entry visas will be accepted, aims to weaken Georgia's pro-Western leadership by creating problems for its people. It came after Georgia severed diplomatic ties with Russia following the fighting between the two former Soviet republics last month.

"A break-off of diplomatic ties is an action that has a price," Russian Foreign Ministry spokesman Andrei Nesterenko said Wednesday in Moscow, adding that the ministry is also considering other measures.

The diplomatic break follows a short war and Moscow's recognition of two separatist Georgia regions, South Ossetia and Abkhazia, as independent nations. The conflict has triggered the worst crisis between Moscow and the West since the 1991 end of the Soviet Union.

Without visas, Georgians cannot travel to Russia unless they have dual citizenship. Hundreds of thousands of ethnic Georgians live in Russia, some with Russian citizenship.

"Now I cannot get to Russia to see my wife," Vakhtang Tsereteli, a Georgian whose wife is a Russian citizen and lives in Moscow, said outside the consulate Wednesday. "I don't know what to do."

Russia closed its Embassy in Tbilisi on Tuesday after receiving formal notice from Georgia that it was severing diplomatic ties, Russian Consul Valery Vasilyev told The Associated Press. He said employees have taken down Russian flags and other symbols that adorned the building.

The Georgian Embassy in Moscow closed Wednesday and all embassy officials will leave by the end of September, according to its charge d'affaires, Givi Shugarov.

The Georgian consulate in Moscow will remain open for now, Shugarov said. When Georgia announced it was severing ties, it said that consular relations would continue _ apparently to punish Russia without hurting Georgians with ties there.

But Vasilyev said the Russian consulate in Tbilisi was suspending operations pending instructions from the Russian Foreign Ministry. Existing visa applications will be processed but new ones will not be accepted, he said.

The conflict erupted Aug. 7 after Georgia launched an assault to regain control of the separatist province of South Ossetia. Russian forces swiftly repelled the offensive and drove deep into Georgia, whose staunchly pro-Western President Mikhail Saakashvili has angered Moscow by seeking NATO membership for the Caucasus nation.

Georgia straddles a major westward route for oil and gas from Central Asia and the Caspian Sea and has become the focus of a struggle for regional clout between Russia and the West.

U.S. Vice President Dick Cheney, in Azerbaijan on Wednesday, is due to arrive in Georgia on Thursday as part of a swing through Russia's southern neighbors to emphasize U.S. interest and support.

NATO Secretary-General Jaap de Hoop Scheffer is scheduled to visit Georgia in mid-September. NATO declined to offer Georgia a road map for membership in April, partly because of concerns about angering Russia, but the alliance has assured Georgia it will eventually join.