Hundreds of health authorities around the world are scrambling to track down people who may have had contact with a man who has a form of tuberculosis considered so dangerous that he has been placed under quarantine since 1963. 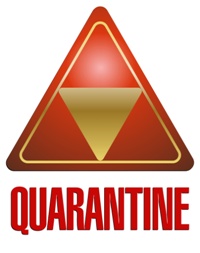 "There are two aspects to this," CDC director Julie Gerberding said. "One is, is the patient himself highly infectious? Fortunately, in this case, he's probably not. But the other piece is this bacteria is a very deadly bacteria. We just have to err on the side of caution."

Health officials said the man had initially been advised not to fly and that he knew he could expose others when he boarded two trans-Atlantic flights  from Atlanta to Paris, and later from Prague to Montreal. The man told an Atlanta newspaper that he took one flight for his wedding and honeymoon and another because he feared for his life.

The man told the Atlanta Journal-Constitution that prior to his departure, doctors did not order him to avoid flying and only suggested he put off his long-planned wedding in Greece.

He knew he had a form of tuberculosis and that it was resistant to first-line drugs, but he did not realize it could be so dangerous, he said.

"We headed off to Greece thinking everything's fine," said the man, who declined to be identified because of the stigma attached to his diagnosis.

He flew to Paris on May 12 aboard Air France Flight 385. While honeymooning in Italy for two days, health authorities reached him with the news that further tests had revealed his TB was a rare, "extensively drug-resistant" form, far more dangerous than he knew. They ordered him into isolation, saying he should turn himself over to Italian officials and not take commercial flights.

"I thought to myself: You're nuts. I wasn't going to do that. They told me I had been put on the no-fly list and my passport was flagged," the man said.

CDC spokesman Tom Skinner said the agency was considering sending its jet to pick the couple up in Italy, the newspaper reported.

Instead, the man flew from Prague to Montreal on May 24 aboard Czech Air Flight 0104, then drove across the border to New York where he voluntarily checked into a hospital and was then flown by the CDC to Atlanta. He told the newspaper he was afraid that if he did not get back to the U.S., he would not get the treatment he needed to survive.

He is now at Atlanta's Grady Memorial Hospital in respiratory isolation, but will be transferred to National Jewish Hospital in Denver, Colorado, which specializes in respiratory disorders, the hospital's spokesman said Wednesday.

CDC officials have recommended medical exams for cabin crew members and passengers who sat within two rows of the man on the flights, but other passengers are not considered at high risk of infection because tests indicated the amount of TB bacteria in the man was low, said Dr. Martin Cetron, director of the CDC's division of global migration and quarantine.

But Gerberding noted that U.S. health officials have had little experience with the "extensively drug-resistant" form. It is possible it may have different transmission patterns, she said. Officials simply do not know yet.

"We're thankful the patient was not in a highly infectious state, but we know the risk of transmission isn't zero, even with the fact that he didn't have symptoms and didn't appear to be coughing," Gerberding said on ABC television's "Good Morning America."

"We've got to really look at the people closest to him, get them skin tested."

Dr. Howard Njoo of the Public Health Agency of Canada said it appeared unlikely that the man spread the disease on the flight into Canada. Still the agency was working with U.S. officials to contact passengers who sat near him.

French health authorities have asked Air France-KLM for lists of all passengers seated within two rows of the infected man, a spokeswoman said Wednesday.

Italian officials said they were tracing the man's movements in Rome and have identified and were trying to notify the passengers sitting near him.

Daniela Hupakova, a spokeswoman for the Czech airline CSA, said their flight crew underwent medical checks and are fine. The airline was contacting passengers and cooperating with Czech and foreign authorities, she said.

Health officials said the man's wife tested negative for TB before the trip and is not considered a public health risk. They said they do not know how the Georgia man was infected.

The quarantine order was the first since the U.S. government quarantined a patient with smallpox in 1963, according to the CDC.

Health officials said the man is not facing prosecution.

"I'm a very well-educated, successful, intelligent person," he told the paper. "This is insane to me that I have an armed guard outside my door when I've cooperated with everything other than the whole solitary-confinement-in-Italy thing."

CDC officials told The Associated Press they could not immediately comment on the interview.

Tuberculosis is a disease caused by germs that are spread from person to person through the air. It usually affects the lungs and can lead to symptoms such as chest pain and coughing up blood. It kills nearly 2 million people each year worldwide.

Because of antibiotics and other measures, the TB rate in the United States has been falling for years. Last year, it hit an all-time low of 13,767 cases, or about 4.6 cases per 100,000 Americans.

Health officials worry about "multidrug-resistant" TB, which can withstand the mainline antibiotics isoniazid and rifampin. The man was infected with something even worse _ "extensively drug-resistant" TB, also called XDR-TB, which resists many drugs used to treat the infection.

There have been 17 U.S. XDR-TB cases since 2000, according to CDC statistics.

The highly dangerous form is "expanding around the world," particularly in South Africa, eastern Europe and the former states of the Soviet Union, said Dr. William Schaffner, chairman of the department of preventive medicine at Vanderbilt University.