One person was killed and seven or eight more were shot in a dormitory and in a classroom on the Virginia Tech campus . 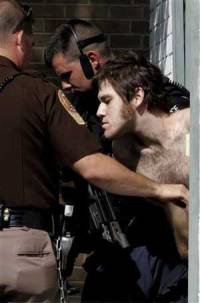 Police confirmed they had a suspect in custody, the university said on its Web site.

On the Web site, Tech confirmed the shooting at opposite ends of the 2,600-acre (1,052-hectare) campus at West Ambler Johnston, a residence hall, and reported "multiple victims" at Norris Hall, an engineering building.

The university said in a news release there were multiple victims. Government officials with knowledge of the case said there were seven to eight other "casualties."

Students were asked to stay in their homes away from windows.

The shooting was reported at West Ambler Johnston Hall.

Officials ordered the campus closed, the second time in less than a year the 26,000-student campus was shut because of a shooting.

In August 2006, the opening day of classes was canceled and the campus closed when an escaped jail inmate allegedly killed a hospital guard off campus and fled to the Tech area. A sheriff's deputy involved in the manhunt was killed on a trail just off campus.