A long-running hunger strike at Guantanamo Bay gained a few participants in recent weeks amid complaints over conditions. 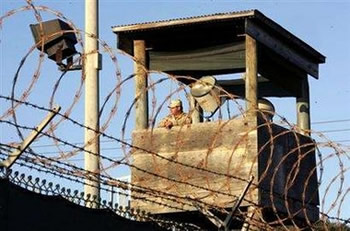 Thirteen strikers were being force-fed through tubes inserted into their noses, said Navy Cmdr. Robert Durand, a Guantanamo spokesman. The strike, which began in 2005 and once involved 131 detainees, reached seventeen participants in the days before the trial in March of Australian detainee David Hicks.

Durand suggested the detainees were trying to gain the attention of dozens of reporters covering the trial at the U.S. Naval base in southeast Cuba, where about 385 men are imprisoned on suspicion of links to al-Qaida or the Taliban.

"As soon as the media left, the number of hunger strikers has been steadily dropping," Durand said.

Lawyers and human rights advocates said the detainees were striking over conditions at Camp 6, a new unit where detainees are confined in solid-wall cells most of the day and have little contact with other prisoners or exposure to natural light.

"The reports about the conditions at Camp 6 are deeply disturbing, and holding people indefinitely without legal process or access to family is an invitation to disaster," said Hina Shamsi, a lawyer with Human Rights First, based in New York.

Detainee Isa al-Murbati of Bahrain, one of about 160 prisoners in Camp 6, told his attorney during a meeting in January that about 20 prisoners had gone on a hunger strike to protest conditions in the unit, which opened in December.

Many prisoners in Camp 6 previously were held in sections of the prison where they could congregate freely with other detainees or communicate with each other through the walls of their steel mesh cells.

In Camp 6, detainees cannot easily talk to each other and are allowed a maximum of two hours a day of recreation in a fenced-in area inside a concrete courtyard. To allow time for all prisoners, sometimes a detainee's allotted time may only be at night.

"The fundamental issue is that people who have been kept in general population areas for years were now being held in isolation cells, without any explanation," said al-Murbati's attorney, Joshua Colangelo-Bryan.

Durand dismissed complaints about Camp 6 that detainees have made through their lawyers as "pure propaganda," arguing the US$38 million (Ђ28 million) facility offers more living space than the metal-mesh cages.

The hunger strike reached a peak participation of 131 in 2005, but the number declined to just a handful after the military adopted more aggressive force-feeding methods, including a restraint chair. Now most detainees abandon the hunger strike before the start of force-feeding.

U.S.-based Physicians for Human Rights has called on the United States to halt the "brutal and inhumane force-feeding tactics."

U.S. officials have said the measures are "safe and humane" and have been used in American civilian prisons.