Communist guerrillas claimed responsibility Monday for a daring prison raid in which they snatched more than 100 guns, and urged their comrades to launch bigger assaults nationwide to seize weapons for new recruits. 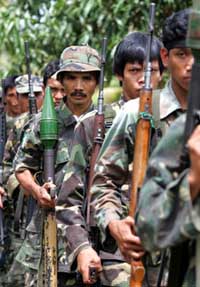 They did not attempt to free any of the about 4,000 convicted criminals detained in the prison complex during the 20-minute raid that was staged without firing a shot, police said, adding there were no injuries.

Rebel spokesman Gregorio Rosal congratulated the Merardo Arce rebel unit that he said seized the biggest number of firearms in a single raid in recent years.

"This large cache will arm more than a hundred new recruits into the NPA waiting for arms to join the next tactical offensives," Rosal said in a statement.

He urged the guerrillas to carry out more attacks to punish President Gloria Macapagal Arroyo's government. The rebels have accused Arroyo of sanctioning the killings of numerous left-wing activists by suspected military hit squads. Arroyo has denied the allegation.

Military chief of staff Gen. Hermogenes Esperon called for an investigation of security lapses that allowed the rebels to attack, saying authorities had learned that the rebels purchased military uniforms and were bracing for an unspecified raid before the prison attack took place.

Police went on full alert after the attack in Davao del Norte, an agricultural province 950 kilometers (595 miles) south of Manila where the insurgents are active.

The prison attack was among the most daring in a wave of recent rebel assaults, which took place despite recent assurances by Esperon that government forces were on track in their campaign to cut the 7,000-member guerrilla force in half by 2010.

The rebels, who have been waging a rural-based rebellion for 38 years, backed off from Norwegian-brokered peace talks in 2004, claiming Arroyo's government had instigated their inclusion in U.S. and European terror lists.