Woman posing as a teenage boy sexually abuses a girl

A 14-year-old girl was sexually abused by a 30-year-old woman posing as a teenage boy. 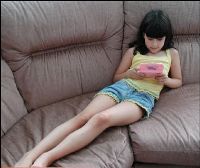 Woman posing as a teenage boy sexually abuses a girl

"I kind of, like, guessed, but then every time I questioned her, she would get really mad," the girl told KOMO-TV of Seattle on Wednesday, "so I just stopped caring."

Prosecutors allege that Lorelei Corpuz posed as a 17-year-old orphan to gain the trust of the girl's family, then beat and molested her. She was charged this week with two counts of third-degree child rape and one count of third-degree child molestation and was being held in lieu of $150,000 (EUR112,300) bail.

The girl said in the KOMO interview that she had been lonely before the yearlong relationship began. Corpuz, who called herself Mark, met the girl at a mall and moved in with her.

"Well, he was really nice, and he knew how to talk to me, because I didn't really have anybody to talk to because my mom and dad are always at work," she said.

She told The Seattle Times in an interview published Thursday that the relationship initially was "a regular teenage girlfriend-boyfriend thing, like holding hands, hugging, kissing," but over time "she made it like a serious relationship, like we're married."

Everett police Officer Don de Nevens wrote in a probable cause statement that although Corpuz had sexual contact with the girl, "the suspect never let victim see her/his private parts and victim always thought that suspect was male until officer informed her otherwise."

Police said Corpuz was found out Sunday after an officer checked the suspect's vehicle, parked at an Everett gas station, to see whether it was stolen. The officer arrested Corpuz after the check pulled up an outstanding traffic warrant under an alias, Mark Villanueva.

The 14-year-old also was in the vehicle, and the officer, who recognized Corpuz from an earlier arrest, asked the girl how she knew the suspect.

"She indicated it was her boyfriend," Everett police Sgt. Robert Goetz said. "That obviously piqued the concern of the officer."

Authorities allege Corpuz had sex with the girl, beat her and bit her twice on the back, leaving a scar. The Associated Press does not publish the names of people who allege they were sexually assaulted.

Snohomish County prosecutors have filed charges in District Court against Corpuz, but expected to refile them in Superior Court. Everett police Sgt. Robert Goetz said he did not know if Corpuz had obtained a lawyer.

With the help of a Vietnamese interpreter, officers interviewed the girl's mother on Wednesday, Goetz said. The mother indicated the family remains shocked by Corpuz's true identity, he said.