North Korea has not shown any unusual military activity after declaring it tested a nuclear bomb, South Korea said Monday after putting its military on higher alert and boosting efforts to determine if there was any radioactive fallout from the test. 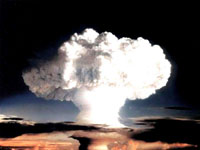 "No particular movement has been detected in the North Korean military both in the front and the rear," the Defense Ministry said in a statement.

The ministry said it put the South's military on higher alert and was closely watching the communist state for any signs of provocation.

"The South and the U.S. are maintaining a joint readiness under a joint crisis management system," it said. "As part of efforts to strengthen surveillance and readiness, we're increasing patrols near the border ... and all heads of military units were ordered to keep their posts."

It also said the military was also stepping up efforts to see if there is any radioactive fallout from the test, the AP said.

Defense Minister Yoon Kwang-ung will hold a meeting of senior military commanders on Tuesday to assess the situation and to discuss a contingency plan, it said.

North Korea said earlier in the day that it carried out its first-ever nuclear bomb test.