The United States will conduct its own investigation into the causes of the Boeing-737-800 air crash in Russia. The passenger jetliner of FlyDubai airline crashed in Russia's Rostov-on-Don on March 19, 2016, killing all on board. 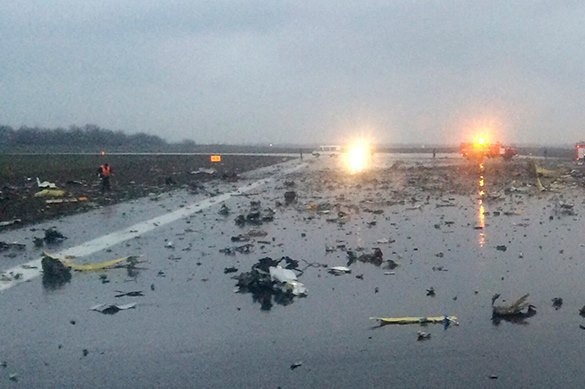 The airplane of the Dubai-based airline that crashed in Russia was equipped with a state-of-the-art display system on retractable see-through screens positioned in front of pilot's eyes. The system is known as Head Up Display (HUD). Experts believe that it was the new system that could make the pilot lose orientation in space. The plane crashed when landing for a second time at the airport in Rostov-on-Don in difficult weather conditions. All 62 people on board - 55 passengers and seven crew members - were killed. It was the world's first crash of a HUD-equipped aircraft.

It was established in 2016 that captain of the aircraft Aristos Socratuos, who was piloting the aircraft, tried to take the aircraft for another circle after a failed landing, but lost orientation in space and sent the liner down instead of ascending. The experienced pilot, experts believe, ignored the data on the control panel and followed his own physiological sensations. However, the pilot's vestibular apparatus indicated a wrong direction down to the ground. As a result, the plane nosedived into the airfield.

Some experts suggested that there was an additional factor that contributed to the loss of pilot's orientation. Transparent displays of the HUD system with flight parameters indicators is installed on latest models of Boeing 787 Dreamliner or Airbus 318. However, FlyDubai ordered the installation of these options for its earlier aircraft, including the crashed Boeing 737-800.

Depending on flight conditions, a pilot can change the mode of operation of the HUD system by swiping his fingers on the glass. In the opinion of investigators, the images that the pilot saw before his eyes synchronised with the words that he said and the actions that he took could have given the most complete picture of the last minutes of the flight. However, flight recorders did not register HUD display data.

Interstate Aviation Committee experts appealed to the manufacturer of HUD displays - US-based company Rockwell Collins, Inc. Representatives of the company promised to restore the sequence of images on the display of the crashed Boeing 737-800 and provide the results of the investigation to the IAC. The company has never conducted such research before as the Rostov disaster was the first crash of a HUD aircraft.