The analysis of flight recorders of the Boeing 737-800 passenger jetliner that crashed in Russia's Rostov showed that the pilot error was the most plausible version of the tragedy that killed all 62 on board. 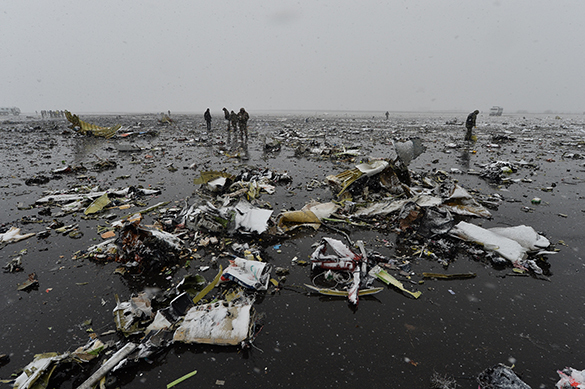 The Boeing-737-800 of Fly Dubai airline crashed in Rostov-on-Don in Russia's south on March 19. The aircraft crashed while landing, killing all 55 passengers and seven crew members.

During an attempt to take the plane higher after an unsuccessful landing approach, the  pilot apparently lifted the nose of the aircraft too much, thus making the plane lose speed and altitude. A conflict sparked in the cockpit; one pilot shouted at his partner: "Where are you flying? Stop!" Yet, his attempts to "win" the wheel only made matters worse.

According to experts, the aircraft made two landing approaches in an automatic mode. Strong winds interfered into the so-called autothrottle system of the aircraft that ensures the flight of the airplane on the predetermined path of descent or take off during autopiloting.

The crew decided to switch to the manual mode for another landing approach. While flying at an altitude of about 270 meters, about 6 km far from the runway, one of the pilots pressed the TOGA key (Take off. Go around) that commands the aircraft to go for another approach and turned off the autopilot, taking full control of the aircraft.

According to the data obtained from flight recorders, the pilot did not take into account the specific transition of the Boeing 737 from landing into climb mode.

When the speed of the aircraft started plummeting, a conflict between the pilots occurred in the cockpit. The first pilot tried to get up to speed and put the engines into the takeoff mode. His partner believed that one should lower the nose of the Boeing first. He was shouting: "Stop. Where? Stop! Stop!" while trying to stop the climb, pushing his wheel away.

As a result, the on-board computer of the aircraft started receiving electrical impulses from the manipulations that the pilots were making at both wheels. The crew began to act in concert only when the uncontrollable Boeing with 62 people on board was diving to the ground at the speed of 325 km/h, at an angle of about 45 degrees. The pilots were only screaming during the seconds before the aircraft hit the ground.

FlyDubai airline was founded seven years ago by the government of the United Arab Emirates. The airline is based at the Dubai International Airport. The low-cost airline has not had air disasters  before. The company started with a few aircraft before it expanded its fleet to 50 Boeing 737-800 aircraft. In November 2013, FlyDubai ordered another 111 Boeing aircraft.