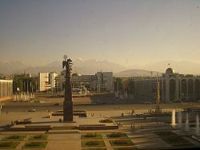 President Almazbek Atambayev said that the Republic of Kyrgyzstan wants to join the Customs Union. "Most of our citizens believe we should live in the common economic space with the brotherly peoples of Russia, Kazakhstan and Belarus", he pointed out.

The Customs Union is preparing a roadmap for autumn 2013 to welcome Kyrgyzstan as a new member by the end of the year. The organization was founded in January 2010. Its member states are planning to create a Eurasian Union by 2015.

The Kyrgyz President also praised  CIS and SCO. He stressed the fact that CIS continues to preserve the common economic and cultural space. Of SCO, Almazbek Atambayev said, "This organization is growing rapidly. Kyrgyzstan wants SCO to have its own bank and development fund."

The Commonweath of Independent States (CIS) was founded in December 1991. Member states are Armenia, Belarus, Kazakhstan, Kyrgyzstan, the Russian Federation, Mongolia, Tajikistan and Uzbekistan. Unofficial members are Turkmenistan and Ukraine.

The Shanghai Cooperation Organization (SCO) was founded in 2001. The countries with membership are China, Kazakhstan, Kyrgyzstan, the Russian Federation, Tajikistan, Uzbekistan, with the dialogue partners Belarus and Sri Lanka. The status of observer states was given to Afghanistan, India, Iran, Mongolia and Pakistan. Guest attendances are observed by ASEAN, CIS and Turkmenistan.