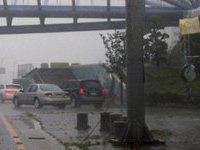 During the night, several villages on the outskirts of the city were left without power, but the supplies of electricity were restored by the morning. The typhoon caused two landslides that blocked the new highway that had been built for the APEC summit, adds Free Press. Currently, the traffic on the highway is blocked, but it is scheduled to resume already on September 18.