A wind-whipped wildfire burning in the rural hills above Ventura County in Southern California has spread over 8,500 acres, or more than 13 square miles. 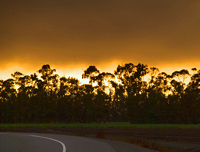 County fire spokesman Bill Nash said the blaze was 10 % contained late Tuesday and an unknown number of evacuations were lifted in areas south of Broadway Road and north of Guiberson Road.

Gov. Arnold Schwarzenegger earlier Tuesday declared a state of emergency for the county, drawing the nesessary resources to fight the fire.

A wildfire is any uncontrolled fire that occurs in the countryside or a wilderness area.

Reflecting the type of vegetation or fuel, other names such as brush fire, bushfire, forest fire, grass fire, hill fire, peat fire, vegetation fire, and wildland fire may be used to describe the same phenomenon.

A wildfire differs from other fires by its extensive size, the speed at which it can spread out from its original source, and its ability to change direction unexpectedly and to jump gaps, such as roads, rivers and fire breaks.