A helicopter search team on Sunday found three bodies and the wreckage of a missing Cessna plane on the southeastern slope of Mauna Loa volcano. 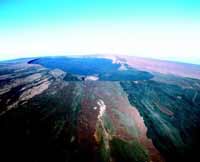 Authorities had previously identified the three people on board as pilot, Katsuhiro Takahashi, 40, of Kailua-Kona, and passengers Nobuhiro Suzuki, 53, and his wife Masako, 56, of Urayasu, Japan.

The Island Hoppers tour flight had been missing since Tuesday after it failed to return from a three-hour aerial tour of the largest island in the Hawaiian island chain.

The plane was found upside down and in four or five pieces. One of its wings had been sheared off. The wreckage was found in the Ka'u Forest Reserve about 5,200 feet (1,585 meters) above sea level.

There are no roads in the area, and the crash site isn't accessible from the ground, said Hawaii County Fire Chief Darryl Oliveira.

County fire helicopters removed the bodies from the wreckage and delivered an investigator from the National Transportation Safety Board to the site.

County officials briefed the families of those on board the helicopter.

"After all this time has passed, they didn't really expect to ever learn of the whereabouts of the family members. But they're very grateful to know at least what happened to them," Janet Snyder of Mayor Harry Kim's office said in a statement to the media on behalf of the Suzuki family.

Although the U.S. Coast Guard had already checked the area, county crews wanted to look there again, in part because area campers reported hearing a plane passing and the noise from its engine abruptly halt.

There was some broken vegetation where the plane struck, but not a great deal, suggesting the plane may have come down at a steep angle, Oliveira said.

The search was hampered because clouds cover the upper slopes of Mauna Loa for most of the day, limiting visibility.

Jim Struhsaker, a National Transportation Safety Board investigator, said his agency would arrange to lift the wreckage out of the forest in the next few days and take it to Hilo or Kona for examination.

Island Hoppers issued a statement saying company officials were shocked and saddened no one survived. It said Takahashi, the company's chief pilot and flight instructor, was universally respected and loved.