By Margarita Snegireva. The Health Ministry bird flu centre reported that an Indonesian woman who bought a live chicken in a marker died from avian influenza on Christmas day. Death toll from bird flu in Indonesia reaches 94. 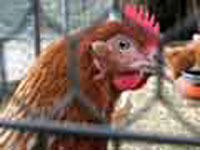 The 24-year-old woman from Jakarta who died on Tuesday morning had tested positive for bird flu after being treated for several days in a hospital, said an official at the centre.

"The woman bought a live chicken in the market and slaughtered the chicken there before taking it home. But we're still investigating the cause," the official said.

Indonesia has had the world's highest number of human deaths from bird flu, Reuters reports.

The global spread of (highly pathogenic) H5N1 in birds is considered a significant pandemic threat.

While prior H5N1 strains have been known, they were significantly different from the current H5N1 strain on a genetic level, making the global spread of this new strain unprecedented. The current H5N1 strain is a fast-mutating, highly pathogenic avian influenza virus (HPAI) found in multiple bird species. It is both epizootic (an epidemic in non-humans) and panzootic (a disease affecting animals of many species especially over a wide area). Unless otherwise indicated, "H5N1" in this article refers to the recent highly pathogenic strain of H5N1.