US troopd work to save Iraqi boy's limbs 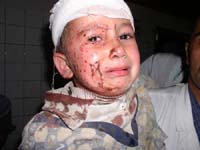 US troopd work to save Iraqi boy's limbs

The boy's dark brown eyes scanned the operating room where he spent two days of lifesaving surgery last month. Layer by layer, the surgeon scrubbed at partially healed wounds to prepare the limbs shattered by a bomb intended for the Americans.

When Abdul-Raad Razak was in this operating room last - on Nov. 18 - the doctors feared the 10-year-old would not survive.

That afternoon, while American soldiers were patrolling a Sunni-dominated hamlet in Arab Jabour south of Baghdad, Abdul-Raad was on his way to the river to turn on the pump that feeds water to his family's home.

He has no memory of the explosion, but the soldiers just 20 meters (yards) away heard it clearly.

"I saw a lot of dust and then I didn't feel anything," said Abdul-Raad. "I looked and saw that my arm and leg were cut off, and I passed out."

The boy tried to move, tried to get to the American soldiers and their armored vehicle. He fainted again. Then he came to once more.

By then, the soldiers from Second Platoon, Alpha Company, 1st Battalion, 30th Infantry Regiment, part of the 2nd Brigade of the 3rd Infantry Division were combing through the grassy banks of the Tigris River, searching for a bomb crater.

Abdul-Raad could still see three soldiers and cried out weakly: "Mister, please help me." They found him in the tall grass.

"We heard a little noise," said Sgt. Curtis Myers, 26, from Carbondale, Ill. "At first, it didn't even look like a person."

1st Lt. Charley Staab, 25 from Novi, Mich., carried Abdul-Raad, his leg hanging on by only some skin and muscle. The boy was pale but conscious. The other soldiers searched the river banks for explosives and found two more bombs.

"A month before, we did an ambush in the same spot, so they were definitely meant for us," Staab said.

Back in the armored vehicle, two soldiers tied tourniquets on the boy's injured limbs. They rushed back to base, where medics were waiting.

"He was definitely a priority to get him out of here," says Staff Sgt. Mica Phelps, 36, a medic from Killeen, Texas.

Once the boy was stable, a medevac helicopter took him to the 86th Combat Support Hospital in Baghdad's Green Zone. Over two days of surgery, Abdul-Raad hovered between life and death. But 11 days later, he returned to the home he shares with his parents and five siblings in Arab Jabour.

Abdul-Raad's first fitting for a prosthetic arm and leg will be in about two weeks.

"I look forward to the day when he can look at what happened and where he is now and say that he's somewhat normal again," said Staab.

But for Arab Jabour - and the medics who treated Abdul-Raad at the patrol base - the days of bloodshed have not yet ended. On Tuesday, a mortar shell landed in town, injuring two young girls. The medics at Patrol Base Murray went to work again and both children were taken by helicopter to the same Green Zone hospital that saved Abdul-Raad's life.