Rather dubious McDonald's food chain makes its clients to choose between tasty and healthy food. 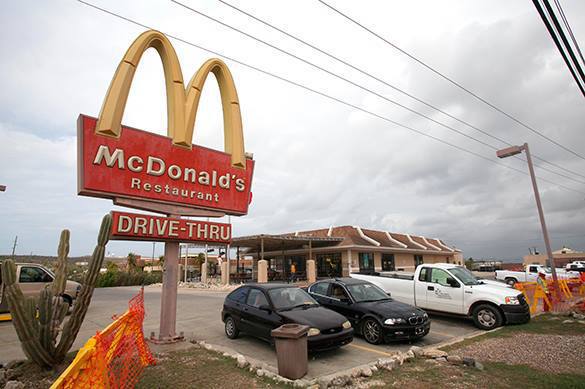 700 snackbars turned out to have been closed so far because of not being able to pay the way. But even such problems do not impede McDonald's getting billions of profit. At the same time the components used in its cuisine terrify even the US National Institutes of Health.

Acrylamide is contained in every McDonald's fries. This chemical is known to the State of California to cause cancer or reproductive toxicity.

Sodium acid pyrophosphate can be found in the McDonald's hash browns, eggs and tortillas. This synthetic substance can lead to dietary imbalances that might contribute to osteoporosis, according to the Center for Science in the Public Interest.

Dimethylpolysiloxane is added to cooking oils and is used as an anti-foaming agent to cook Filet-o-Fish, Chicken McNuggets and french fries. It can also be found in cosmetics, hair conditioners, silly putty and even in breast implants.

A petroleum-based product THBQ can be found in eyeshadows and Chicken McNuggets, used as a preservative.

Sodium benzoate found in sauces, and most of their soft drinks, is lilnked to increased hyperactivity in children.

Disodium 5′-ribonucleotides should be avoided by asthmatics and people with gout.

Sodium metabisulfite used in tortillas, is known to cause allergic reactions. It is also related to certain diseases and health conditions, including skin conditions, lethargy, diabetes, bloating, joint pain and even brain fog.

High-fructose corn syrup, which as McDonald's PR managers claim, is similar to sugar, tends to generate diabetes instead.

McDonald's has many other 'cuisine intrigues', but these listed may set you to thinking before approaching the so-called restaurant.

Also read: McDonald's food likely to be banned in Russia