The World Trade Organization predicts that world trade will grow in the near future but not as fast as it had predicted, forecasting an increase of 3.3 per cent in 2015 and 4 per cent in 2016, down from 5 and 4.3 per cent, respectively. The average of the last three years has been 4.3%. 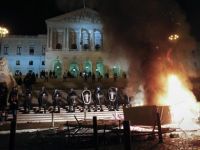 As for the IMF, the forecast for the Euro Zone is more optimistic, predicting an average growth rate of 1.5 per cent in the economies of the countries in this group for 2015 and 1.6 per cent in 2016, an increase of 0.3 per cent and 0.2 per cent respectively.

As for the world economy, the IMF forecasts a growth rate of 3.5 per cent for 2015 and 3.8 per cent in 2016, basing this forecast on the recovery of the world economic drivers and the fall in the price of oil.

As far as the European Union is concerned, the IMF considers that the growth rate forecast is "fragile" and "unequal" and states that there are countries which will not reach growth levels. The IMF suggests "more political measures" to guarantee sustainable growth.

More austerity on the way?