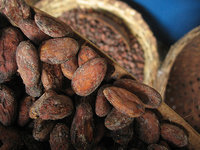 Cocoa rose to $2,225 per tonne in London - the highest since a spike in May last year - leading to fears that the price of chocolate will increase if the ban stays for longer than a month.

Cocoa makes up about a quarter of the price of a bar of chocolate. Although the crop harvest in Ivory Coast was better than usual this year, any supply disruptions due to the continuing political uncertainty could force the price even higher, according to Telegraph.co.uk.

The European Union, responding to Alassane Ouattara's call for a halt to cocoa and coffee exports, on Monday said a trade embargo was a future "option" if existing sanctions failed to squeeze out Laurent Gbagbo.

Ouattara, internationally recognised as the winner of Ivory Coast's recent presidential election, earlier on Monday moved to choke off funding for his rival Gbagbo by ordering the immediate stoppage of cocoa and coffee exports, News24 reports.