Dollar Falls Down as Index of Premature Risk

The dollar slipped across the board on Tuesday as investors poured fresh funds into riskier assets at the start of 2010, and as the market awaited Federal Reserve meeting minutes and U.S. jobs data later in the week. 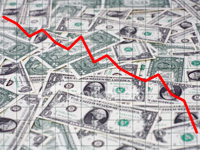 Dollar Falls Down as Index of Premature Risk

The U.S. currency reversed gains made versus the euro and yen last week, unable to capitalise on strong U.S. manufacturing data released on Monday.

The figures did little to alter the view that U.S. interest rates will stay low for the next few months, which had kept the dollar weak for much of last year.

Ahead of Wednesday's release of minutes from the Fed's policy meeting last month, Fed Governor Elizabeth Duke on Monday said rates needed to be kept "exceptionally low" for an "extended period". [ID:nN04212241]

Analysts said the minutes, along with U.S. payrolls due on Friday, would help determine the dollar's near-term direction.

"A lot is going to hinge on the FOMC minutes and the payrolls," said Geoffrey Yu, currency strategist at UBS in London."People want to square positions ahead of Friday, while taking a marginally risk-positive view," he said.

Increases in risk appetite have also been a drag on the dollar, eroding the currency's safe-haven appeal in favour of higher-yielding currencies as investors get more optimistic on the world economic outlook.

The dollar did trim some of the losses as European shares spent much of the early session in negative territory, but higher oil and gold prices suggested risk appetite was broadly buoyant as fund managers rebuild portfolios in the new year.

The dollar rose in the last days of 2009 as signs of an improving U.S. economy prompted some to believe the Federal Reserve could start to tighten monetary policy in 2010.

Its year-end gains were reflected in the latest data from the Commodity Futures Trading Commission released on Monday, which showed an increase in long dollar positions for a second straight week to Dec. 29. [ID:nN04195958]

Some analysts said the long positioning merely suggested shorts had been closed out, and did not necessarily indicate the dollar would post more significant gains in the near term.

Data showing a euro zone inflation rose 0.9 percent year-on-year in December had little impact on the market, which awaited upcoming figures on U.S. factory orders and home sales to gauge whether the U.S. economy was continuing to improve.

Friday's payrolls are seen offering more direction for the dollar. The median forecast of analysts polled by Reuters is for a decline of 8,000. [ECI/US]