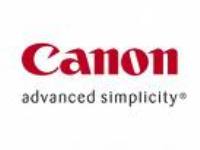 However, Canon's operating profit came in at 44.91 billion yen in April-June, down from 160.15 billion yen a year earlier, but that was up from a 20 billion yen profit in the previous quarter, in a sign Canon's quarterly earnings may have bottomed out.

Prior to the announcement, shares in Canon closed down 0.3 percent at 3,370 yen, outperforming the Tokyo stock market's electrical machinery index .IELEC.T, which fell 1 percent ,Reuters reports.

Meanwhile, Canon Inc. will spend roughly 25 billion yen ($262.6 million) on streamlining design and product data systems in 2010 in order to save more than 100 billion yen over three years, according to a report Tuesday.

In addition, data for design and development will be shared among divisions overseeing production preparations, prototypes and output control, the report said , MarketWatch reports.