Discover Financial Services, the credit-card company that's lost more than a third of its market value since being spun off by Morgan Stanley in June, said profit fell 65 percent on charges tied to selling a U.K. unit. 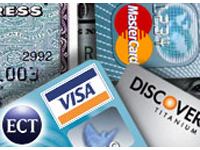 Discover Financial Services is an American financial services company, which issues the Discover Card and operates the Discover and Pulse networks. Discover Card is the third largest credit card brand in the United States, when measured by cards in force, with nearly 51 million cardholders.

First-quarter net income declined to $81.2 million, or 17 cents a share, from $233.6 million, or 49 cents a year earlier, Riverwoods, Illinois-based Discover said today in a statement. Profit excluding a $158 million loss from discontinued operations was 50 cents a share.

Discover's sale of Goldfish to Barclays Bank Plc ended a two-year venture that lost money both years and caused a $391 million pretax writedown in the fourth quarter. Discover paid $1.7 billion for Goldfish to gain customers in the U.K., the world's second-largest credit-card market, and agreed last month to sell it for $70 million.

Discover, the fourth-largest credit-card network, fell $1.11, or 6.4 percent to $16.29 in New York Stock Exchange composite trading at 10:16 a.m., after falling as much as 14 percent. The company has declined 44 percent in New York trading since its debut last year on concern a weaker U.S. economy may hurt consumers' ability to pay debt.

Income generated by the U.S. card business fell 6 percent to $375 million before taxes as Discover set aside more for soured loans. The company boosted reserves by 54 percent to $627.1 million after 3.93 percent of loans were late by 30 days or more, 62 basis points higher than a year earlier. Loans climbed 2 percent to $47.5 billion.

The company booked a $172 million writedown of Goldfish assets and $14 million of net income from the unit, resulting in the $158 million loss from discontinued operations.

The sale will increase earnings starting in the second quarter because it will free capital for other uses, Discover said on Feb. 7. Goldfish posted operating losses of $87 million in 2006 and $205 million last year. U.K. credit card companies faced surging defaults after bankruptcy law changes, a reduction to late fees and a housing boom and bust.

In the United States, Discover, as a card brand, competes primarily with Visa, MasterCard, and American Express. Unlike Visa and MasterCard, Discover directly issues its cards, through its Discover Bank unit. Discover is the fourth largest credit card issuer, when measured by card balances, behind Bank of America, JPMorgan Chase, and Citi, and ahead of Capital One and American Express.

In addition to its card products, Discover also markets savings products, home loans, and student loans. The company also began offering a Discover Debit card product directly to banks in 2006, through its Pulse interbank network, which Discover acquired in 2004.