Office Depot Inc. on Tuesday induced shareholders to reject one shareowner's bid to nominate two directors in an attempt to remove its current and former chief executives from the board. 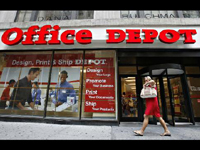 The shareholder, Woodbridge Group, had said on Monday it intended to nominate former presidents of Office Depot and rival Staples Inc. to the Office Depot board to serve in place of two company candidates, current CEO Steve Odland and former CEO David Fuente.

But Office Depot said in its statement on Tuesday that removing Odland and Fuente from the board in favor of Woodbridge 's "dissident" nominees "would be highly disruptive, and could destabilize the company and damage prospects for a successful turnaround."

The tension leading up to the April 23 annual meeting comes as Office Depot's financial results have suffered. Its stock price has fallen 69 percent in the past year.

Woodbridge Group said it would nominate ex-Office Depot President Mark Begelman and former Staples president, Martin Hanaka, for the Office Depot board, adding that the two were committed to "taking immediate and aggressive action to turn around Office Depot's business and redefine its position in the marketplace."