Thornburg Mortgage Inc., the lender that sold $21.9 billion of assets in August due to a cash shortage, said it may have to sell more securities to meet lenders' demands for increased collateral. The company declined the most in six months in New York trading. 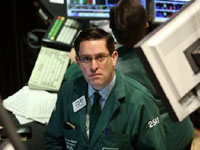 Thornburg met $300 million of margin calls since Feb. 14, which has depleted available cash and reduced its ability to meet future demands for more collateral, the lender said in a filing with the U.S. Securities and Exchange Commission today.

Thornburg, which specializes in adjustable-rate loans of $417,000 or more, was one of more than 100 mortgage companies that halted loans or left the business in 2007. The company was forced to sell assets in August as U.S. foreclosures climbed to a record and investors shunned securities backed by home loans. Thornburg, based in Santa Fe , New Mexico , resumed lending in September and issued $500 million in preferred shares to bolster its finances.

Bonds backed by Alt-A loans lost 10 to 15 percent of their value since the end of January, leading to the margin calls on such securities. Alt-A mortgages are typically made to home owners with credit scores that are above subprime and below prime. Alt-A borrowers often have weaker documentation of their income levels than prime borrowers.

About 0.44 percent of Thornburg's loans were more than 60 days late as of Dec. 31, well below the industry's average ratio of 4.2 percent on adjustable rate loans, Thornburg's filing showed.