New passenger-car registrations fell 0.3% in Europe in January, with robust sales in emerging markets to the east neutralizing slow sales in the west. 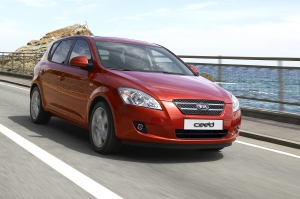 The result is a likely indicator of the trend for the year. Europe 's major automakers such as France 's Renault, Peugeot Citroen forecast that European market would decline this year as a result of a slower economy.

Like the other two automakers, Daimler of Germany said growth would come from emerging markets like China , India , Russia and elsewhere.

Registrations for the 27 member states of the European Union (EU27) and EFTA countries summed up 1,308,761 units in January. Those for western Europe -- 15 EU member countries and EFTA countries -- fell 1.7 percent. Excluding EFTA, the total fell 1.6%

For the fourth month in a row their registrations went up by more than 10%. In absolute figures, the four leading markets clearly are Romania , Poland , Hungary and the Czech Republic .

Other countries like Britain , France and Italy all declined, with Spain the worst with a 12.7% fall.

Among the biggest car makers by market share, the Volkswagen group fared best, with sales rising a meager 0.6%, while GM did the worst, falling 8.1%.