By Margarita Snegireva. New Era Canning Co is expanding a recall of canned green beans and garbanzo beans because of potential botulism contamination, the U.S. Food and Drug Administration said on Friday. 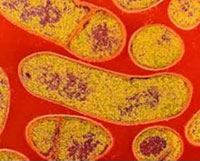 The FDA said the beans might be contaminated with Clostridium botulinum, which can cause botulism, a serious and sometimes life-threatening condition.

The affected cans are large institutional-sized containers, weighing approximately six and a half pounds, the FDA said.

"To date, no illnesses have been reported to the FDA; however, consumers should not consume these products, even if they appear to be normal," the agency said in a statement.

Botulism (Latin, botulus, "sausage") is a rare, but serious paralytic illness caused by a nerve toxin, botulin, that is produced by the bacterium Clostridium botulinum. Botulinic toxin is one of the most powerful known toxins: about one microgram is lethal to humans. It acts by blocking nerve function and leads to respiratory and musculoskeletal paralysis.

In the United States an average of 110 cases of botulism are reported each year. Of these, approximately 25% are foodborne, 72% are infant botulism, and 3% are wound botulism. Outbreaks of foodborne botulism involving two or more persons occur during most years and are usually caused by the consumption of home-canned foods. The number of cases of foodborne and infant botulism has changed little in recent years, but wound botulism has increased because of the use of black tar heroin, especially in California. In July 2007, a widespread recall was initiated due to botulism contamination of food manufactured by Castleberry's Food Company. Shortly after in August 2007, the FDA issued a warning of botulism risk from canned French cut green beans manufactured by Lakeside Foods Inc, of Manitowoc, Wisconsin