A MiG-29 fighter jet crashed in Russia's Tver region today. According to the chairman of the Russian Air Force press service, Alexander Drobyshevsky, the aircraft was making its scheduled sortie in the area of the airbase in the town of Andreapol. According to the information from the aircraft's black box, the pilot failed to use the catapult. Most likely, the crash occurred on account of a technical malfunction. 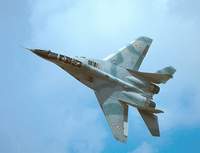 The area of the town of Andreapol has won ill reputation in the history of the Russian aviation. Military planes crash in the area on a regular basis. An-22 plane crashed while taking off in January 1922, killing seven. An-12 cargo plane crashed in December 1996 on the outskirts of Andreapol. Seventeen people were killed in the crash, including a high-ranking military official.

Tragedies continued in the 21st century too. Two plane crashes occurred in the same area of Russia's Tver region in 2003. L-410 plane with 23 skydivers on board crashed on March 3rd, 2003. Fourteen skydivers jumped out of the falling plane and survived the accident. Eleven people died. MiG-31 fighter jet fell down in October of the same year: the pilots catapulted and stayed alive.

The history of MiG-29 jets is rich with air crashes. This model of the military plane crashed in the summer of 1988 at Le Bourget air show: the crash left no victims, luckily. MiG-29 jets are included in the arsenal of 27 countries. They crash when foreign pilots guide them too. One of the planes went on fire when flying in India, on August 6th, 1999. The plane crashed on the ground and exploded. MiG-29 of Peru's Air Force crashed in March 2001 during an air show, at which a committee of the Peruvian parliament was studying exploitation opportunities of the plane. The pilot catapulted and said that the crash occurred on account of technical drawbacks. Peru refused to buy the jets as a result.

The last tragedy with MiG-29 fighter jets took place in Malaysia on November 9th, 2004. The plane fell down when one of its engines went on fire.

MiG-29 is a fighter jet of the fourth generation. It is a single-seat pursuit plane with two engines and the twin-fin tail.