US: Assassination of Citizens, Uncounted "Collateral Damage" and a Law Suit

The words of Nasser al-Aulaqi, have a measured, dignified determination, shadowed by bewilderment and the betrayal by a country for which he had had respect, happy memories and which had provided aspects of the basis for his considerable achievements. 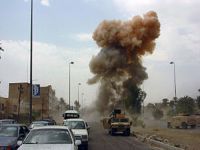 The words of Nasser al-Aulaqi, have a measured, dignified determination, shadowed by bewilderment and the betrayal by a country for which he had had respect, happy memories and which had provided aspects of the basis for his considerable achievements.

Nasser al-Aulaqi is the father of  Anwar al-Aulaqi and the grandfather of sixteen year old Abdulrahman al-Aulaqi, both killed in American drone strikes in the Yemen, within two weeks of each other, in September and October 2011, respectively. Both were American citizens.

He writes: "A country that believes it does not even need to answer for killing its own is not the America I once knew.

"From 1966 to 1977, I fulfilled a childhood dream and studied in the United States as a Fulbright scholar, earning my Doctorate and then working as a researcher and assistant Professor at universities in New Mexico, Nebraska and Minnesota.

"I have fond memories of those years. When I first came to the United States as a student, my host family took me camping by the ocean, on road trips to places like Yosemite National Park, Disneyland and New York - it was wonderful.

"After returning to Yemen, I used my American education and skills to help my country ..." (i) He ultimately became Minister for Agriculture and Fisheries between 1988 and 1990, President of the capitol city's Sana'a University, and in 1996, founded what has become a leading institute of learning, Ibb University.

Ironically, in 2011, the year of the assassination of his son and grandson, targeted killings, which, it is alleged, the Nobel Peace Prize laureate President of America personally makes the decisions on a weekly basis (ii) Tawakel Karman, a graduate in Political Science from Sana'a University was awarded the Nobel Peace Prize, the first Yemeni and Arab woman so honoured.

Abdelrahman was born in Denver, Colorado, returning to Yemen when he was seven: "My grandson was killed by his own government."

His grandfather describes a: " ... typical teenager", who watched "The Simpsons", listened to rapper Snoop Dogg, had a multi-friended Facebook page and: "A mop of curly hair and glasses, like me."

In September 2011, the sixteen year old had left the home in Sana'a, where he lived with his mother and grandfather, in the early morning. He left a note for his mother saying he was going to look for his father, who he had not seen for some years, who he missed. He asked her forgiveness for leaving without permission, says Nasser al-Aulaqi. A journey mirrored by countless young people across the globe, where family break ups and separations have left often long hidden scars on the young.

Two days after Abdelrahman left, his mother and grandfather heard from relatives in southern Yemen, from where the family originated, that he was safely there with them and his cousins.

On September 30th, his father was executed by drone,  far away in the north of the country, killed with twenty eight year old Samir Khan, also an American citizen, and three other people.

Samir Khan edited Inspire magazine, cited as aiming to radicalize young Muslims against the West and in which Anwar al-Aulaqi has been said to have been deeply involved.

When Samir  was growing up in Queen's, then Westbury, New York and later in Charlotte, North Carolina, where he attended Central Piedmont Community College, he is said by classmates to have refused to recite the Pledge of Allegiance and to have blamed the 11th September attacks on America.

He is hardly alone in the latter looking at the ever expanding experts, academics, legal brains in the 9/11 Truth Movement (iii) - and given the  murderous contempt with which his family's country, Pakistan, is treated by the US, he could hardly be blamed for not wanting to pledge allegiance to his family's homeland's tormentors.

According to Nasser al-Aulaqi, in 2010, the Obama Administration put Anwar : " ... on CIA and Pentagon 'kill lists' of suspected terrorists, targeted for death (but) never charged him with a crime. No Court ever reviewed the government's claims, nor was any evidence of criminal wrongdoing ever presented to a Court."

He was simply: "deprived of his constitutional rights as an American citizen" as was Samir Khan. The three others assassinated were, presumably, "collateral damage."

After his father's death Abdulrahman called saying he was making plans to return home: "That was the last time I heard his voice."

Exactly two weeks later he was killed whilst eating dinner in an open air restaurant, with his teenage cousin, on a tropical Yemen evening. Five others were also killed.

In the interests of balance, whatever about Inspire magazine, to target the staff of Denmark's Jyllands-Posten which published the hate-inciting cartoons of the Prophet Muhammed, leading to riots and attacks on Western embassies, or to drone to death those responsible for the appalling  "Innocence of Muslims" which depicts the Prophet as womanizer and madman - and may have contributed to the death of US arms-running Ambassador Christopher Stevens and colleagues, in Benghazi, Libya on 11th September 2012 - would be unthinkable. In the starkest of double standards, these shameful provocations have been justified as legitimate rights of freedom of speech and expression.

Nasser al-Aulaqi learned that his grandson: "has been killed by an American drone strike from news reports the morning after he had died."

He: "visited the site later, once I was able to bear the pain of seeing where he sat in his final moments. Local residents told me his body was blown to pieces. They showed me the grave where they buried his remains. I stood over it, asking why my grandchild was dead.

"Nearly two years later, I still have no answers. The United States government has refused to explain why Abdulrahman was killed:

"It was not until May of this year that the Obama administration, in a supposed effort to be more transparent, publicly acknowledged what the world already knew - that it was responsible for his death.

"The attorney general, Eric H. Holder Jr., said only that Abdulrahman was not 'specifically targeted' raising more questions than he answered.

"My grandson was killed by his own government. The Obama administration must answer for its actions and be held accountable."

In a complex series of legal initiatives, stretching over a year, the American Civil Liberties Union and the Center for Constitutional Rights (CCR) on behalf of Mr al-Aulaqi and Sarah Khan, mother of Samir Khan, are challenging the Obama Administration's right to be Judge, jury and executioner, to: "claim it could kill anyone it deemed an enemy of the State." The latest hearing began in Washington, last Friday, 19th July. (iv)

CCR's Senior Staff Attorney Pardiss Kebriaei, argues that: "The government's position is unprecedented and extraordinary. It claims the most consequential power a government can exercise against its own citizens - the power to take life without due process - and asserts that the Courts should have no role at all in reviewing its actions, even after the fact, even when the killings are off any battlefield.

"The Court should exercise its constitutionally mandated role and review our clients' fundamental claims. It is for the court to determine the legality of the government's actions, not for the government simply to assert it."

Nasser al-Aulaqi had not just been a grandfather to Abdelrahmen, he had been a father. The teenager was: "born and lived in Denver until he was seven, then he came to live with me in Yemen. He used to tell me he wanted to follow in my footsteps and go back to America to study. I can't bear to think of those conversations now."

CCR's Pardiss Kebriaei and Hina Shamsi, from the ACLU's constitutional challenge to the government's claim that it can take the life of its own citizens without due process and that the Courts should have no role in reviewing these actions, elicited an interesting response from the Judge to the U.S. Justice Department lawyer:

"You are saying they have constitutional rights but can't assert them anywhere." (v)

The ruling is awaited.

Writing this two thoughts came to mind. One was the endless rhetoric from the US and UK governments about ruthless despots who "kill their own people."

The other, especially in the light of what is now known of tracking every move, of any citizen, anywhere on earth, it seems, by their mobile 'phone or computer was, did the distressed call of a sixteen year old - who had just lost the father for whom he was searching - to his grandfather and acting father, activate the ability to track him and murder him?

You can add your name to the call for an end to unlawful targeted killings at: