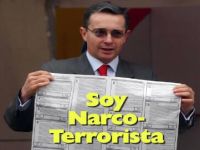 The Uribe candidates have proclaimed that Uribe is resolved to defend and deepen "Uribe's legacy," when what the country needs is just the opposite: get rid of Uribe, who has done nothing but aggravate existing problems and created new ones. They repeat all the ejaculations of the leader: "Democratic security, investor confidence, social cohesion." It is a basic program, if taken literally: providing security, maintaining trust, ensuring cohesion. They are the basic obligations of any state.

They were not met in Colombia before Uribe's government, no doubt. But neither has he met them. On the contrary: in the last eight years security has decreased, mistrust has increased and division has grown among Colombians (both economically, the gap between rich and poor, and politically, the confrontation between "good" and "bad" or “pro-Uribe” and “anti-Uribism“).

Security. It is true that today there are fewer kidnappings and the roads are less dangerous than before. And that's only natural having increased security costs to the colossal figure of 15 billion pesos a year, and the number of troops to 430,000 men in arms: there are police in all municipalities and army battalions in all the country's mountains . Having extradited major narco bosses, and twenty thousand men with fifty thousand turning in their weapons, but the narcoparamilitary structure remains intact under the euphemistic name of 'Bacrim' (criminal gangs), with new bosses and their political contacts, although some are imprisoned, are still the leaders of rural “Uribism.”

The guerrillas have suffered severe beatings, bombings, desertions and casualties in combat, and were again relegated to the depths of the forest (or borders), but retain their ability to recruit, which is due not only the appeal of their ideas, but the naked fact that the area is devastated by the government's agricultural policy that offers no job prospects, but two: either the guerrillas or the paramilitaries. And the results paid are costly: in reward money, and especially in the moral monstrosity of "false positives" caused by the shift of these rewards: nearly two thousand innocent people were killed by the security forces. And the displaced: the river of millions of men and women driven from the fields to swell the sea of misery and crime in cities. That's not security.

Nor can it become so, because security is not obtained by a prescription of Uribe silver and lead, bribery and repression, that has been tried and failed (though on a smaller scale) by their predecessors. The recipe is different, the owners of power and wealth do not want to test it here: social justice.

As for the recipe for combating drug trafficking violence, which also finances all the others, it is something different: the legalization of the business.

Confidence: If what Uribe called "investor confidence" really existed, millions of citizens would not have invested their savings in illegal 'pyramids'. And labor reforms would have served to create jobs, instead of destroying them. And much of the nationals would not have fled, taking their tax breaks and foreign capital (excluding miners). And millions of people would not have had to leave Colombia in search of work.

With regard to confidence in general, it is enough to look at the unbridled growth of corruption to infer that no one believes one can win if one does not steal. And it cannot be otherwise under a government that buys and sells the notary offices, who are the guarantors of public faith, as if they were livestock.

Only drug dealers seem to have confidence in Colombia, to live and invest, work and raise their children. Which are increasingly confused with members of the political class. A country in which that happens cannot be a country that has been well governed, in the eight, and in the hundred previous years before.

Cohesion: Is it possible to talk seriously about "social cohesion" in a country at war? No. It is only possible if, like the pro-Uribe, one denies that war is war.

Insecurity. Distrust. Polarization. That is the legacy left by eight years of cheating, corruption and the brutal government of Álvaro Uribe. Today on Sunday, which is election day, it's time to vote against the beneficiaries of such a legacy, those who want to keep supporting it.