In actuality, Russia had no national flag until the mid 19th century

The National Flag Day was commemorated in Russia yesterday on August, 22. The people of Russia got used to the flag with horizontal bands of white, blue, and red. The flag has been flying over the Kremlin for 14 years now. However, it was not until 1994 that Boris Yeltsin declared August, 22, a national holiday,  three years after the flag was first hoisted over the citadel of the Russian government. 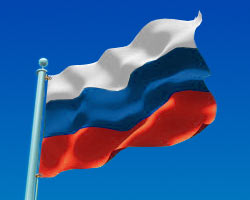 The reasons behind the delay are quite understandable. The new holiday was coming into being in haste and commotion as the new Russia's state system was shaping up in the hard way. It was a time shortly after the attempted coup d'etat fell though. Thousands of people were waving hundreds of tricolors as they stood around the so-called White House, a parliament building in the center of Moscow. Boris Yeltsin was quick to declare the popular tricolored symbol of resistance a national flag of Russia. Still, the Soviet Union was in place and the Russian Federation was officially called the Russian Soviet Socialist Federative Republic. That state had yet to be abrogated. It was demolished in December 1991 by the Russian leadership that did not seem to have any second thoughts regarding the consequences. More troubled times followed featuring fierce power struggle between the Russian Parliament and President Yeltsin. Mr. Yeltsin eventually disbanded the parliament and overpowered his enemies. With a new custom-made constitution on hand, the time was finally right for declaring new holidays.

The Flag Day has never become a “red day” i.e. a bank holiday in the calendar. The national flag along with the coat of arms and the national anthem are part of the state symbolism. In fact, the Flag Day is more than 300 years old. The story began in the 60s of the 17th century under the rule of czar Alexei Mikhailovich. The first flotilla was built in Russia. The czar ordered to use a white-blue-red banner as an identification mark for the ships. The Russian warship Orel  first displayed the flag. Scientists believe that the Russian tricolor was modeled on the national flag of the Netherlands. The Dutch flag was Europe's first flag of liberation, it was reportedly designed during the war against the royal Spain.

Russian Emperor Peter I issued a decree fifty years later. Pursuant to decree, “merchant marine ships” were to fly the white-blue-red flag. The emperor drew a design of the flag himself.

In actuality, Russia had no national flag until the mid 19th century. On April 28th, 1883, Alexander III decreed that only the white-blue-red flag must be used. The tricolor became the official symbol of the czarist Russia on the eve of the coronation of Nicholas II. The tricolor survived the February revolution in 1917 while the black-yellow-white flag and the Russian monarchists became inseparable. The Bolsheviks introduced their proletarian red flag shortly after they seized power in October 1917.

The so-called Russian Liberation Army of General Vlasov, formed by the Germans out of Soviet defectors and POWs on the Eastern front, used the tricolored banner. It was the only time the tricolor was back in action after the Bolshevik revolution and the Civil War. Some opposition leaders of the Yeltsin era even called the tricolor a “flag of the traitors.” Those leaders were wrong because the tricolor might as well be called a “flag of Peter the Great.” And Peter the Great has become one of the unofficial symbols of the modern Russian state. Besides, one should not call the official state symbol into question using improper historical insinuations. The state symbol that was adopted by two-thirds of the State Duma deputies i.e the overwhelming majority of the people's representatives.

Vexillologists (those who study flags) put forth three versions to explain the colors of the Russian tricolor. Some experts believe that the order and color of the bands are related to the ancient concept of the world. The red one, physical and fleshy, is at the bottom. The blue one, the color of heaven, is stuck in between. The highest band is white, the color of divine things.

Other experts say that the color of white indicates freedom, the blue one means Our Lady, and the red color stands for the advocacy of a strong state. Meanwhile, there is more up-to-date interpretation of the Russian flag colors. The white color means peace, purity, perfection; the blue one means faith, loyalty, and consistency. The red one stands for energy, strength, and blood shed for the Fatherhood.