Many of us are still absolutely sure that only people living in poor conditions of life, having little money and crowded apartments may catch pediculosis. But it proves to be an erroneous opinion as today more and more adults and children from well-off elite Moscow families have pediculosis. Lice are getting more selective; they like when people wear good scents and give everyday care to their body and hair. And Moscow’s best children hospitals prove that the paradox is true. It often happens that ladies in well-off families and wives of outstanding rich men neglect pediculosis until it is far gone. 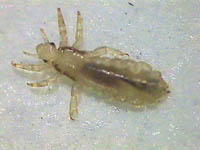 The notion ‘lousiness of prosperity’ appeared in Germany and is applied to countries with the high standard of life. Now it can also be applied to Moscow where pediculosis is one of the most widely-spread infections. 151,567 patients having pediculosis, which makes half of all patients with the same diagnosis in Russia , were officially registered in Moscow in 2005.

Muscovites catch pediculosis every three minutes. Only one of ten people having pediculosis apply for medical aid at hospitals while others keep living with lice for years.

A female journalist of a Moscow edition was terribly shocked when one day discovered that she had pediculosis. And she has become more careful in communicating with other people since the day of the tragic discovery. Now, other people’s hair is the object of the woman’s intense concern every time she appears in crowded places, at banquets, at the theatre or in the office. She arrived at a conclusion that lice particularly love clean and fragrant women. To notice a louse, one must look carefully at people’s hair parting, back of the head and behind the ears. A woman having lice betrays her terrible condition with her movements. She slowly brings a hand to the head and strokes the skin under the hair with her finger-pads. In several minutes she repeats the same thing. Lice spread about Moscow when ladies having pediculosis kiss and hug their friends each time they meet and part.

Every drugstore offers medications against pediculosis but they are not so widely advertised as remedies to fight acne, avian flu, diarrhea, haemorrhoids or pyrosis. We are still inclined to believe that people from good families never catch lice and hope that each of us personally will never have to use such medications.

The journalist who one day discovered the disaster in her hair cannot say for sure how she probably could catch lice. Probably her daughter brought some from her school or may be the mother and the daughter got pediculosis when they carelessly tried on bonnets at a store in summer. The woman was not at all alarmed with slight itching of the skin under her hair after that shopping. She decided the itching began because of the hot summer weather and sweating and just scratched the head from time to time. When the itching became more intense, the woman felt she could not touch the head because of pain. And the fact was not alarming again for her. She explained the painful itching with an allergy to pesticides that fruits may contain early in summer. Days were passing by but antiallergenic medicines the woman took were ineffective. Her daughter scratched the head too and complained of mosquitoes that she believed to be the reason of the itching.

A bit later, the woman noticed tiny paired bites on her hands that looked like the bites of some micro vampires. The red dots covered the woman’s neck from the nape of the neck to the shoulders. She realized that delays were really dangerous and decided to visit a doctor, better a dermatologist. Unfortunately, the journalist chose a low-qualified doctor who just glanced at the hands speckled with tiny bites and without any close examination of the patient diagnosed her as having scab. At that, the doctor treated the patient with some kind of disgust. The doctor’s recommendations were to disinfect the apartment, boil all the family clothes at a high temperature and make all family members apply a medicine against scab that she prescribed. At that, the doctor seemed to be really surprised why the patient having scab had a terrible itch of the head. It never occurred to the doctor that probably she diagnosed the patient incorrectly and the woman was suffering from some other disease.

In the evening, the patient treated the apartment with the spray that smelt terribly and caused somewhat of poisoning to the family members. Then, the woman applied a medicine against scab to the skin of all family members and decided to study websites dedicated to scab while the medicine was taking effect. Internet publications on the issue stated quite distinctly that scab never spread over head and neck while the woman had her disease spread on that particular areas. It meant that the doctor diagnosed her incorrectly and the family was suffering from some other disease. So, the first visit to the doctor was a bad luck and the medicines she prescribed were an absolute waste of money. The Internet publications that the woman studied made her see that her diagnose was pediculosis.

Unlike fleas about which Russian classical writers even wrote poems, lice do not jump but slowly move. Their tiny eyes see nothing but the light that they must immediately escape in the depth of hair. The head louse sips human blood slowly. There are also clothes lice that live deep in the clothes folds and are not widely spread under normal conditions of life where people wash their clothes in washing machines and change dresses regularly. And the third type of lice parasitic on humans is the crab louse that lives on the short hair on genitals, beard, eye brows and eyelashes. This type of lice is transmitted in sex contacts.

This is strange that scientists give no definite answer why lice settle on some people and never spread on others.

So, the journalist had to visit another doctor to find out if her conjectures about pediculosis were true. At a municipal dermatological clinic the woman was given a thorough examination, and an elderly doctor confirmed that she actually had pediculosis and prescribed a new portion of medications to fight lice. But the new treatment produced no immediate effect as lice got immune to medications and would not die.

The exhausted journalist even resorted to folk medicine to get rid of lice. She made a cranberry puree in a blender and made a hot application on the hair of it. The remedy was much more effective against lice that the previously taken medicines.

The woman was fighting lice for two months already when it occurred to her that it might be important to meet someone who studied the lice professionally. She talked to Candidate of Biological Sciences Alla Frolova and learnt a lot of new interesting information about lice. The biologist told that little nymphs, the young lice, change their capsules three times before they become adult. In childhood, lice belong to no definite sex, male or female. It is strange but historic documents state that in bygone times people were considered healthy if they had lice. And combing lice out of the hair of one’s darling was an element of courting at that time.

The meeting with the expert studying lice added much courage to the journalist in fighting lice. Now she knows that it will take her a bit more time and persistence but she will finally get rid of the trouble. Unfortunately, the woman will certainly keep forever the habit of watching people’s hair closely trying to guess if they have lice or not.