General Motors (GM) said Tuesday that it now expects 40% better fuel economy in city driving from the gasoline-electric hybrid versions of its full-size SUVs than their gasoline-only counterparts, giving the hybrid Chevrolet Tahoes and GMC Yukons 19 or 20 miles a gallon in stop-and-go driving. 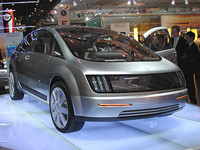 That's up from earlier forecasts of a 25% improvement and would give the big SUVs better mileage than some mid- and full-size, gasoline-power family sedans. It also would be better than so-called crossover SUVs that are stealing sales from truck-based SUVs such as Tahoe because crossovers typically use less fuel.

The Tahoe and Yukon, due in showrooms in the fall, will be the first full-size gasoline-electric hybrid SUVs. The so-called dual-mode hybrid system was jointly developed with Chrysler Group and BMW, which plan to offer it in vehicles next year. GM will offer it next year on Cadillac Escalade, then on Chevy and GMC full-size pickups. Saturn models will get a version later.

Other brands' hybrid SUVs show bigger in-town gains — 50% to 80% better than similar gasoline models — but sacrifice some truck attributes, such as towing capacity or four-wheel-drive capabilities. The GM SUVs are able to tow up to 6,200 pounds, vs. 8,200 pounds for gasoline-powered GM SUVs. And the hybrid SUVs will use a conventional four-wheel-drive system with low-range gears suitable for low-speed challenges such as sand or mud.

If GM's forecast is accurate, expect the big hybrid SUVs to be rated 19 or 20 miles per gallon in town, 20 or 21 in both highway and combined city-highway driving, using the government's 2008 fuel economy formula. A typical gas-only Tahoe is rated 14/19/16. It is normal for a gasoline-electric vehicle to have similar ratings for city, highway and combined driving.

GM also said it plans to build 10,000 of the hybrids this year, ambitious because there's no track record to show whether full-size SUV buyers will accept hybrids. For comparison, Ford Motor has sold about 11,000 compact Escape hybrid SUVs so far this year, usatoday.com reports.

In yet another sign that the slowing pickup market is having a major impact on automakers, General Motors on Tuesday confirmed that it will cut the number of trucks it builds at its Pontiac, Michigan, assembly plant. The plant builds heavy-duty GMC Sierra and Chevrolet Silverado pickups.

GM said an unspecified number of workers would be laid off at the plant. The Associated Press reported that the plant's assembly-line speed will be cut from 54.5 vehicles per hour to 45.

The GM news comes on the same day that Nissan announced dismal first-quarter results that were attributed in part to a drop in the demand for its light-duty trucks, such as the Nissan Titan.

GM said production cuts were not scheduled for any of its other truck plants in North America and Mexico.