World’s highest skyscraper Burj Dubai, which Emaar Properties builds in Saudi Arabia, will be open for public access in September 2009, RIA Novosti reports with reference to the press service of Downtown Burj Dubai. 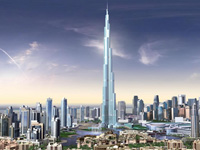 The tower already rises 780 meters high into the sky (160 floors), but its final height will not be exposed until the construction is completed. The tower may reportedly reach the height of one kilometer by September.

A special construction was designed to guarantee the stability of the tower: each level of the tower is dislocated clockwise from the axis.

Nearly all offices in the tower have already been sold, although the 127th and the 135th floors are still vacant.

The first metro line of Dubai (70 stations) will be launched simultaneously with the skyscraper.

The construction of Burj Dubai began in 2004. The skyscraper has already become the highest building in the world in spite of the fact that it has not been completed yet. The previous record belonged to the 628-meter-high KVLY-TV tower in the United States. Investments in the construction of the skyscraper exceed $1 billion.