DiCaprio as Putin or a Russian film about Obama?

It has been reported recently that Hollywood harbors an idea to make a film about Russian President. Announcements about the project tentatively titled "Putin" appeared on the website of Knightsbridge Entertainment and on the world's largest film database IMDB. 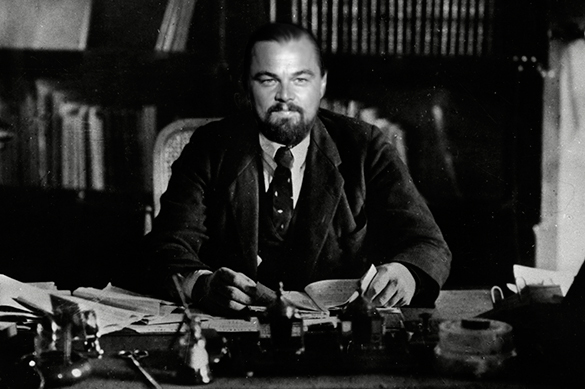 It was also said that Hollywood actor Leonardo DiCaprio would play the role of the Russian president. According to a top manager of Knightsbridge Entertainment, Valery Saaryan, there are actually four world-famous actors who take part in the casting for the role. The work on the motion picture, Saaryan added, would start in the spring of 2016. He did not expose the name of the director, but said that it would be an Oscar-winning filmmaker.

"This is a film project that does not need to be coordinated. We have not communicated with President Putin on the subject. Anyways, all the technical issues have been set, verified and reverified by company lawyers," the representative of Knightsbridge Entertainment told RIA Novosti.

"Firstly, Vladimir Vladimirovich does not know anything about it. Secondly, we do not know whether DiCaprio expressed a wish to play the role of Putin, if there is such a role at all, because, frankly, we have not seen DiCaprio's statements anywhere," said Peskov.

Noteworthy, Leonardo DiCaprio said in one of his recent interviews with a German publication that he would be interested in playing Russian President Vladimir Putin, Grigory Rasputin or Vladimir Lenin.

In pictures: DiCaprio's Russian girlfriend on the beach

"It appears to me that DiCaprio has been channeling his Russian roots recently. I've heard that his grandmother was Russian. Interestingly, I've heard that he wanted to play Lenin too. I wouldn't be surprised if he says Peter the Great as well. According to the American tradition of making films about living presidents, the film is unlikely to be complimentary. An American film about Putin will not be a benevolent piece of work in relation to Putin, no matter what DiCaprio may say," said Alexander Korobko.

"With all due respect, the idea of ​​the picture does not depend on a popular actor - it depends on producers, script writers and the film studio. I'm not sure whether DiCaprio is in great physical shape, just like our president. If he works out a bit and does some judo, he would be closer to that," the film producer told Pravda.Ru.

Alexander Korobko believes that Russian filmmakers could easily make a film about Obama, taking into consideration the fact that there are many African students studying in Moscow.

"I know that in the Yaroslavl region, there is a tractor driver who is said to be Obama's cousin and he looks very much like Obama too. I've heard that he is very capable guy, a talented one, and we could cast him for the role. To be honest, I would be a lot more interested in that, rather than in an American film about the Russian president. I've recently seen DiCaprio's latest film, "The Revenant," and I was disappointed, because Hollywood has gone down to the level of gore flicks. Finally, I am not sure if DiCaprio is the best contender for the role of President Putin," Korobko concluded.

"It is much more interesting where the Russian cinematography goes. I very much hope that the era of films about alcoholics, singing karaoke, is over with. I also hope that we will start making films about Putin, Obama, chess games, etc. It seems to me that now is the time when we need to think about it instead of showing interest in what Hollywood is doing - I am not even interested in what they intend to make," the expert said.