Inter-babushka rejected by all her children and grandchildren 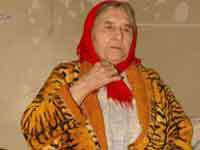 The story of a 86-year-old woman, Natalia Arkhiriy, who traveled from the United States to the city of Sortavala (in Russia's Karelia Republic) to visit her son, shocked the whole Russia. The old lady did not reach her destination. The woman was left all alone at a train station in St. Petersburg and later found herself at a hospital. Her son strongly refused to meet his mother. The man claimed that he had personal reasons for that.

Three years ago, Natalia Arkhiriy moved from the Perm region of Russia to her daughter in the United States. It was extremely hard for the old lady to live in the foreign country and she decided to come back home. The woman said that she wanted to leave to her son, who lived in the city of Sortavala. The woman was so eager to leave the USA that she even threatened her 60-year-old daughter to kill her if the latter did not agree to help her with the departure.

As a result, the woman's daughter had to join her mother in a long journey from the USA to Finland's capital, Helsinki. The daughter, Ekaterina, could not come to Russia (she was denied a visa) so she put her mother on a train to St. Petersburg.

"It was an extremely hard decision to make for the 60-year-old woman. She had to go on such a long and expensive journey at her age to take her mother to Russia," an employee of the Committee for Labor and Social Protection of St. Petersburg Ekaterina Maiboroda said.

In St. Petersburg, Natalia Arkhiriy, who can walk only with the help of a walk stick, was supposed to meet her son, Mikhail. The woman did not meet her son: police officers met her instead. Afterwards, the helpless elderly lady was taken to a hospital of St. Petersburg.

The woman's son, Mikhail, aged 62, saw a news report about his mother on TV. The man went to police where he said that he had not seen his mother in six years. He told investigators that he was going to buy his mother a house in Sortavala, but the woman did not want to live there because of the cold climate. Afterwards, the man said his mother started to threaten him during her visits to the city.
Mikhail does not communicate with his sister, who resides in the USA. The brother and sister never had warm feelings to each other.

Natalia Arkhiriy is currently staying at the Center for Social Service for Population in St. Petersburg. Employees of the center say that the elderly woman is very hard to deal with indeed.

"She is a woman of a nasty temper. Anyone may find it hard to get along with such a woman," an official said.

Natalia Arkhiriy says that all she needs is to see her son. The woman's granddaughter appeared after the story was made public. The woman said that she did not want to accommodate her grandmother at her home. Natalia's son Mikhail strongly refuses to take any part in his mother's fate either. He does not even want to see her, not even once. The man claims that his own mother is a complete stranger for him.

In accordance with the Family Code, only able-bodied individuals are obliged to take care of their parents. All of Natalia Arkhiriy's children are pensioners. The authorities of St. Petersburg are currently trying to find out if the woman has any home left in the Perm region.

Who is right and who is wrong in this story? It is hard to judge, but there is one thing clear: the old lady was rejected by her own children and even grandchildren. It is not about the Family Code, it is about human relations.