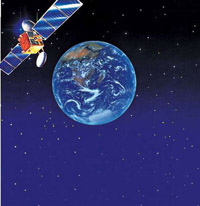 China is to launch its first lunar probe on Wednesday, just weeks after its rival, Japan , sent satellite into moon orbit.

The wider window has been set for between Oct. 24 and Oct. 26, but the best time is about 6 p.m. on Wednesday, Li Guoping, a spokesman for the China National Space Administration, said Monday.

"Inspections of the satellite and the rocket have been completed. The test results are normal and they fully fulfill the technical requirements," Li said.

The Chang'e 1 orbiter will be launched from the Xichang Satellite Launch Center in Sichuan province in southwestern China, Li told reporters.

The launch comes after Japan's space agency announced nearly two weeks ago that its probe was in high orbit over the moon and all was going well as it began a yearlong project to map and study the lunar surface.

The Chang'e 1 orbiter will use stereo cameras and X-ray spectrometers to map three-dimensional images of the lunar surface and study its dust.

After Chang'e is launched, it will orbit Earth as technical adjustments are made, and by Nov. 5 it will enter lunar orbit, Li said.

It is to transmit its first photo back to China in the second half of November. "Then it will work for one year of scientific exploration," Li said.

Its goals will be to analyze the chemical and mineral composition of the moon and to explore the characteristics of its surface.

"The orbiting of the moon is a high-tech project of self innovation. This is the first time for China to conduct moon exploration," Li said.

"It will set the technological foundation for the development of China's space exploration," he said.

China sent shock waves through the region in 2003 when it became the first Asian country to put its own astronaut into space. This year, China also blasted an old satellite into oblivion with a land-based anti-satellite missile, the first such test ever conducted by any nation.

The regional space rivalry is likely to be joined soon by India, which plans to launch a lunar probe in April.