Voters in the tiny, disputed British colony of Gibraltar have elected Chief Minister Peter Caruana to a fourth straight term in office, its government said Friday. 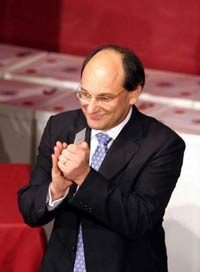 The Gibraltar Social Democrats led by Caruana, who helped steer the Rock toward a historic accommodation last year with Britain and Spain, won 49 percent of the votes in Thursday's parliamentary election, compared to 45 percent for his main, left-leaning candidate, Joe Bossano.

Spain and Britain have been squabbling over Gibraltar for 300 years. But a year ago Caruana reached a deal to resolve thorny issues stemming from the dispute while sidestepping the main one - Spain's claim to sovereignty.

On Dec. 16 commercial flights between Gibraltar and Spain began, part of a deal that will eventually see the Rock's airport operated as a gateway to lucrative Spanish Mediterranean holiday resorts, also allowing Spanish cruise ship tourists easy access to the Rock's historic port.

Until then there were no flights from Spain to Gibraltar, and Spain denied use of its airspace to Gibraltar-bound planes. The only ones coming in were from Britain.

The promontory is at the eastern end of the Strait of Gibraltar, a strategic waterway that links the Atlantic and the Mediterranean and separates Europe from Africa.

An Anglo-Dutch fleet captured Gibraltar in 1704. Spain ceded sovereignty over it to Britain by treaty in 1713, but has persistently sought its return, claiming the territory as a natural and historic part of its geography.

Gibraltar is a quirky, multicultural British outpost of 30,000 people, most of whom speak perfect Spanish and even own property along Spain's southern Mediterranean coast.