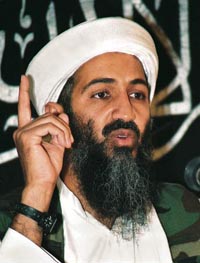 A new video of Osama bin Laden presenting the last testament of one of the Sept. 11 suicide hijackers, marking the sixth anniversary of the attacks, will be released by Al-Qaida, it announced Monday.

The announcement came only days after bin Laden appeared in his first video in three years, giving an address to the American people, lecturing them to abandon capitalism and democracy and convert to Islam.

The announcement came in a banner advertisement posted on an Islamic militant Web site where al-Qaida often releases messages and was signed by Al-Sahab, the media arm of bin Laden's al-Qaida terror network.

"Coming soon, God willing, the testament of the attacks on New York and Washington, Abu Musab Waleed al-Shehri, presented by Sheik Osama bin Laden, God preserve him," the banner read. It showed an image of bin Laden wearing the same black beard and clothes as in the most recent video.