South Korea expressed outrage after the Taliban killed a captive Korean pastor in Afghanistan and renewed its call Thursday on the militant group to immediately release the remaining 22 hostages. 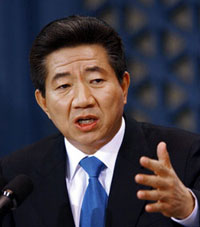 Presidential spokesman Chun Ho-sun said the hostages were not known to have any health problems. Despite earlier reports that some had been freed, he said Seoul believed 22 remained in captivity.

Chun added that both governments were cooperating and that an Afghan official had told South Korea earlier Thursday that Kabul intended to negotiate with the Taliban. He said Seoul is aware of the Taliban's current demands but declined to specify them.

Seoul also repeated its call that no rescue mission be launched that could endanger the captives further.

Earlier, chief presidential secretary for security affairs Baek Jong-chun said before departing as a high-level envoy to Afghanistan that the kidnappers "will be held accountable for taking the life of a Korean citizen." He also expressed "heartfelt condolences" to the bereaved family.

The South Korean victim was found Wednesday with 10 bullet holes in his head, chest and stomach in Ghazni province, the region where the group was seized July 19 while riding a bus, said Abdul Rahman, an Afghan police officer.

Bae, a deputy pastor and a founder of Saemmul Presbyterian Church, led the church's volunteer work in Afghanistan. He is survived by a wife and a young daughter.

He was known for being a passionate leader of the church's 300-member youth group, where he would lead each individual in private prayer, a church official told The Associated Press, asking not to be named due to the sensitivity of the ongoing standoff.

Bae previously suffered from lung disease and had recovered, but was still taking medicine.

He regularly traveled aboard on volunteer missions twice a year, and had planned to head to Africa after returning from the Afghanistan trip.

The South Korean presidential secretary Baek said Seoul would not tolerate the Taliban's inhumane act, saying that "the killing of an innocent civilian cannot be justified under any circumstance or for any reason."

Cha Sung-min, 31, whose 32-year-old sister Cha Hye-jin was being held, said relatives were struggling to remain calm despite the setback.

"After hearing the sad news, yesterday was a very difficult day," Cha told reporters at the Seoul offices of an aid group involved with the volunteers' trip, where families gathered to monitor the situation. "We believe the best way right now is to trust our government and follow it."

"The fundamental cause of the kidnapping is the U.S. war against Afghanistan in the name of an anti-terror campaign, and our government's support to the U.S. by sending troops to the wrong war," said activist Jung Young-sup.

The Taliban had initially urged South Korea to withdraw its troops from Afghanistan. Seoul reaffirmed that it already intended to pull its troops out of the country by year-end as previously planned.

South Korea has about 200 troops serving with the 8,000-strong U.S.-led coalition in Afghanistan, largely working on humanitarian projects such as medical assistance and reconstruction.

But the militants later changed their demand, asking to swap South Korean captives for an equal number of imprisoned Taliban fighters.