Republican U.S. presidential hopeful Rudy Giuliani on Thursday defended his commitment to renewable energy such as ethanol production despite his law firm's work on behalf of major oil companies. 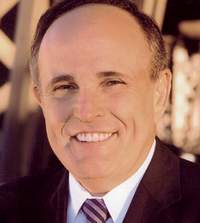 Campaigning in Iowa, the first party caucus state and home to more than two dozen ethanol refineries, Giuliani promised to lead the country away from reliance on foreign oil with construction of ethanol plants and nuclear reactors. Ethanol "gives us hope for the future," Giuliani said while touring the Hawkeye Renewables plant in Fairbank.

Yet at a stop at a diner in Waterloo, the former New York mayor was questioned about his law firm, Houston-based Bracewell & Giuliani, and its lobbying work.

The firm has lobbied Texas legislators on behalf of Citgo Petroleum Corp., a Texas-based oil company ultimately controlled by Venezuelan President Hugo Chavez. The firm also has worked on behalf of Saudi Arabia's oil ministry in a Texas court case, and its other legal clients include ChevronTexaco; BMB Munai, a developer of oil wells in Kazakhstan, and Statoil, a Norway-based oil and gas conglomerate.

Giuliani himself, however, did no lobbying for Citgo, which was a client of the law firm before Giuliani joined, Giuliani and Citgo officials have said.

"The reality is law firms represent a lot of people. They represent people in the renewable energy field, all these ethanol companies do business with all the big oil companies, they are part of a movement, and one thing has nothing to do with another," Giuliani said. "Law firms represent businesses, companies that have legal interests. Sometimes they are in trouble, sometimes they need help, they don't reflect your political views."

The presidential candidate added: "Law firms aren't political, so this is kind of a silly way in which people attack each other on politics, it has no relationships to your political position. As a lawyer, or a law firm ... you don't make determinations of who you represent on your political philosophy."

Giuliani leads all presidential candidates in contributions from donors and spouses of donors employed by the oil and gas industry. An analysis by the nonpartisan Center for Responsive Politics placed Giuliani's contributions from such donors at $396,000 through June 30, far ahead of the second highest oil and gas beneficiary, Mitt Romney.

The ethanol industry is expanding rapidly in the United States. More than a quarter of the corn crop will go into ethanol this year in the United States, according to Agriculture Department estimates, up from 20 percent last year and 14 percent in 2005.

Where a presidential candidate stands on ethanol use is a critical issue for White House contenders hoping to win Iowa's first-in-the-America caucuses, scheduled for Jan. 14.

Giuliani said he supports the 51-cent-a-gallon tax credit created by Congress to encourage growth of the ethanol industry: "I agree with subsidies for energy independence," he said. The tax credit expires in 2010.