Victoria Beckham is "just a normal girl from London" who happens to be "living quite a surreal life" with her soccer star husband David and their three young boys. 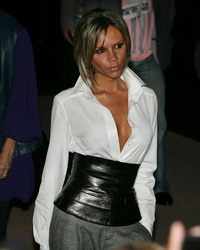 Americans can judge for themselves when the newest British import is seen in a one-hour NBC special, "Victoria Beckham: Coming to America," airing July 16 at 8 p.m.

As if Posh and Becks are not besieged enough by cameras, the special follows Victoria Beckham as she prepares to move from Europe to the United States for her husband's July 21 debut with the Los Angeles Galaxy of Major League Soccer.

"It's funny. People really get to see what I'm really like. I have quite a dry sense of humor, which I hope is going to translate to Americans," Beckham said by phone from her London home where boxes were piled up ahead of the family's move Wednesday.

"I'm incredibly blessed and I wanted to show that to everybody."

Beckham called herself "a working mum" who is focused on developing her signature line of clothing, sunglasses and perfume.

"That's my passion and that's what I'm good at," she said.

Beckham said her family was "so excited" about relocating that her boys "actually think they're moving to Disneyland."

Beckham described her family life as almost quaint, hanging out at home and watching DVDs.

David Beckham appears briefly in the special, but viewers will not see the couple's three sons - Brooklyn, 9; Romeo, 4; and Cruz, 2 - or their BFFs, Cruise and Holmes.

"We don't ever allow the children to be photographed or filmed. We like them to be normal kids," she said. "I didn't want any of my friends in there, either."

"This isn't a reality show, it's a documentary about me," Beckham said. "Anything we do professionally, we try to keep the children out of it. We don't sort of traipse them up and down the red carpet."

Among the executive producers of the one-hour special is "American Idol" creator Simon Fuller, who managed the Spice Girls pop group that launched Victoria Beckham to fame.

"I'm certainly not using this as a springboard to launch any sort of solo career, you'll be glad to hear," she said.

Citing the 1997 movie "Spice World," which followed members of the pop group, Beckham gave her acting a bad review.

"I really wasn't that good," she said. "I must be the only person in L.A. that doesn't want to be in films."

But she still wants to sing.

The Spice Girls tour is set to open Dec. 7 in Los Angeles, reuniting the five-member girl group that sold millions of records in the 1990s before breaking up in 2001. A greatest hits album with a couple new songs will be out in December. The women now have seven children between them.

"I want my kids to see Mommy on the stage doing what I used to do and I want David to see it again," Beckham said. "David is going to come on tour because it starts when his football ends."

If you think you know Posh from reading the tabloids, she says forget it.

"People can have preconceptions because of the photographs that they see of me, because of some of the stories that they read about me as well," she said. "A lot of the time it couldn't be further from the truth. We're so used to having things written about us that aren't true."

Case in point: Beckham denied an item in Sunday's Los Angeles Times that said her husband gifted her with a $1.8 million (1.32 million EUR) diamond-encrusted sex toy when their third son was born.

"I can honestly say that is not true," she said, laughing. "We do buy each other nice things, but it's never as extravagant as people make out."