Canada wants to increase its Arctic military presence in an effort to assert sovereignty over the Northwest Passage - a potentially oil-rich region the United States says is international territory. 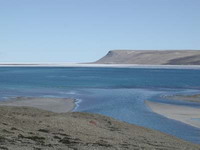 Prime Minister Stephen Harper said six to eight patrol ships will guard what he says are Canadian waters. A deep water port will also be built in a region the U.S. Geological Survey estimates has as much as 25 percent of the world's undiscovered oil and gas.

Harper said the Arctic is central to the Canadian identity.

"Canada has a choice when it comes to defending our sovereignty over the Arctic. We either use it or lose it. And make no mistake, this government intends to use it," Harper said.

The Northwest passage is historically famous for being a possible route that could connect the Atlantic and Pacific Oceans, but ice and weather made it inhospitable for explorers who longed to find such a route to Asia.

Sir John Franklin, a veteran Arctic explorer, and 128 hand-picked officers and men perished mysteriously in 1845 on their expedition to find a northwest passage. Their disappearance prompted one of history's largest rescue searches from 1848 to 1859, which resulted in discovery of a passage.

As global warming melts the passage - which now is only navigable during a slim window in the summer - the waters are exposing unexplored resources such as oil, fishing stocks and minerals, and becoming an attractive shipping route. Commercial ships can shave off some 2,480 miles (3,990 kilometers) from Europe to Asia comparable to the current routes through the Panama Canal.

The U.N. Intergovernmental Panel on Climate Change says the ice cap is warming faster than the rest of the planet and ice is receding, partly due to greenhouse gases.

"The ongoing discovery of the north's resource riches coupled with the potential impact of climate change has made the region a growing area of interest and concern," Harper said.

The disputed route runs from the Atlantic to the Pacific through the Arctic archipelago. Canadians have long claimed the waters, but their government has generally turned a blind eye to the United States, which has sent naval vessels and submarines through what it considers an international strait.

Canada also wants to assert its claim over Hans Island, which is at the eastern entrance to the Northwest Passage.

The half-square-mile (0.8-kilometer) rock, just one-seventh the size of New York's Central Park, is wedged between Canada's Ellesmere Island and Danish-ruled Greenland, and for more than 20 years has been a subject of unusually bitter exchanges between the two NATO allies.

In 1984, Denmark's minister for Greenland affairs, Tom Hoeyem, caused a stir when he flew in on a chartered helicopter, raised a Danish flag on the island, buried a bottle of brandy at the base of the flagpole and left a note saying: "Welcome to the Danish island."

Denmark sent a letter of protest to Ottawa, while Canadians and Danes took out competing Google ads, each proclaiming sovereignty over the rock 680 miles (1,094 kilometers) south of the North Pole.

Some Canadians even called for a boycott of Danish pastries.

Harper did not name the location of the new port but said it will serve as a naval operating base and for commercial purposes.

"It is no exaggeration to say that the need to assert our sovereignty and protect our territorial integrity in the North on our terms have never been more urgent," Harper said.

The patrol ships with steel-reinforced hulls will be able to go through ice a meter thick and will be armed and equipped with helicopter landing pads to accommodate the new helicopters being purchased by the Canadian military.

Harper said the government opted for a more versatile fleet than heavy icebreakers because there is little need to patrol the area during the winter when ice prevents it from being a shipping route.

"It's an international channel for passage," Foster said.