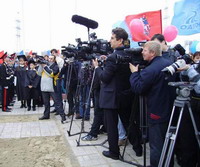 But the pictures kept appearing over the past week, a sign that some of Britain's media laws - among the most restrictive in Europe - are becoming increasingly irrelevant in an age when any passer-by with a cell phone camera can become a photojournalist, and reach a world wide Internet audience.

Despite their requests that the photographs from Scotland not be disseminated, police have not so far pursued any of the media involved, an indication they also sense a change.

"There has been a sea change, to be honest," said Daniel Taylor, an attorney who previously represented British tabloids The Sun and The News of the World. "Newspapers had been much more cautious about what they wanted to publish."

Britain's media laws are largely intended to insulate jurors from information likely to prejudice their verdict. In Britain, the concern for keeping a jury's mind clear of prejudice outweighed the public's right to know, a reversal of the U.S. formula, said Mark Hanna, who teaches journalism at Sheffield University.

The exact extent of the rules are unclear, Hanna said, but are generally agreed to prohibit journalists from publishing a suspect's criminal record or evidence presented at bail hearings on the grounds that such evidence could be inadmissible in court and might bias potential jurors.

But many experts question whether such an arrangement can survive the Internet age.

Judges might still keep a tight rein on the domestic media but the widespread availability of English language news from abroad, amateur video, photo sharing sites, and anonymous online content have undermined judges' control over what juries see or hear.

Media now have access to images from many more sources, as was the case last week, when an amateur photographer happened to capture images of Kafeel Ahmed, the suspected driver of the Jeep that crashed into Glasgow Airport on June 30.

The British newspapers and television stations that ran the pictures did not immediately respond to calls for comment. But Bob Satchwell, the director of the Society of Editors, said publishing the photo of a fire-scarred Ahmed struggling against police officers was perfectly fair.

"If someone is seen being manhandled by police at the scene of a crime, the idea that identification is an issue, someone's got to raise an eyebrow at that," Satchwell said.

In the meantime, the domestic media itself has become bolder in challenging reporting restrictions even as enforcement has flagged. Satchwell said the last time he could remember the restrictions becoming a major issue was in 2001, when the editor of The Sunday Mirror resigned after an article in his paper led to the collapse of an assault trial.

The judge had argued that publishing the information would prejudice a related case.

Satchwell said that the British laws, codified in 1981, needed to be updated for the age of the Internet and cable news.

"The law is still showing some 19th attitudes in the 21st Century," Satchwell said. "We've now got a 24 hour global media _ to try and hold the line on contempt with the old rules is asking someone to put a genie back into a lamp."