The new director of the National Hurricane Center was temporarily reassigned Monday, amid calls from about half his staff telling that he undermined the American public's confidence in the center's forecasts. 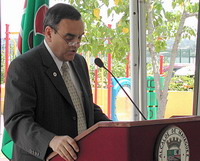 Proenza replaced veteran center head Max Mayfield in January. More than 20 of Proenza's nearly 50 employees had urged his dismissal, claiming he damaged public confidence in their forecasts by repeatedly and publicly criticizing the U.S. government for not providing enough funding, particularly to replace an aging weather satellite.

Staff members say Proenza misrepresented the problem with the satellite and they were worried the consequences would actually hurt their forecasting abilities.