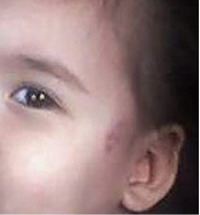 "She looks well and she is in very good spirits," he said as the child laughed in the background.

The toddler told The Associated Press by phone that she was "fine" and happy to see her mother.

In Britain, Foreign Secretary David Miliband said he was "delighted" and thanked those who worked to secure her release.

"I was delighted and relieved to hear of Margaret's release," he said. "I am grateful to the Nigerian authorities for all their help and I hope the perpetrators will be swiftly brought to justice."

Gunmen seized Margaret while the car taking her to school idled in traffic Thursday in Port Harcourt, an oil industry center.

Her Nigerian mother, Oluchi Hill, had previously said the abductors had contacted her and demanded an unspecified ransom for Margaret's release. She had also said her daughter was being fed only bread and water, and that the gunmen threatened to kill the girl if the parents did not meet their demands - including one that the father take his daughter's place.

Her British father, Mike Hill, has lived in Nigeria for years and works in the energy industry. He also runs a popular nightspot in Port Harcourt.

It was the first abduction of a foreign child in the increasingly lawless oil region of Africa's biggest oil producer.

Margaret, whose driver was stabbed as he tried to shield her during the attack, is the third child to be seized in six weeks. The other two victims, both released unharmed after a few days in captivity, were the children of prominent Nigerian families.

Kidnappings in the region have focused mostly on foreign, male workers of international companies presumed to have the resources for ransom payments.

More than 200 foreigners have been kidnapped since militants stepped up their activities against the oil industry in late 2005 and more than 100 expatriates have been seized this year alone as criminal gangs took up the practice.

Two hostages, one British and one Nigerian, died last year when military patrols crossed the hostage takers' paths and a gunbattle ensued.

Hostage takers routinely issue threats over the welfare of their captives, but no hostage has ever been seriously injured by kidnappers while in captivity. More than a dozen foreigners are currently in captivity, including five seized Wednesday from a Royal Dutch Shell oil rig.